In the decades that NOAA’s Office of Response and Restoration has been providing scientific support for responses to oil and chemical spills, OR&R scientists have developed a trove of specialized tools to help them do their work.

The oil spill trajectory model GNOME that launched back in 1999 has been greatly improved and expanded into a powerful suite of tools. The suite helps estimate how spilled oil will move on the water and how it will weather or change. It helps users access the inputs they will need to run GNOME, and helps them estimate the probability that a spill will reach a specific area.

Similarly, the programs comprising the CAMEO® software suite, developed jointly by NOAA and the EPA for over 30 years, have helped emergency workers quickly characterize chemical hazards, predict potential effects of chemical releases on people and the environment, and get response recommendations. Today, the CAMEO tools have been expanded, improved, and offered in a variety of formats. All are available as desktop programs (for Windows and Mac), plus CAMEO Chemicals is also available as a website, mobile website, and mobile app (for iOS and Android). The CAMEO Chemicals app is now NOAA's most downloaded app. 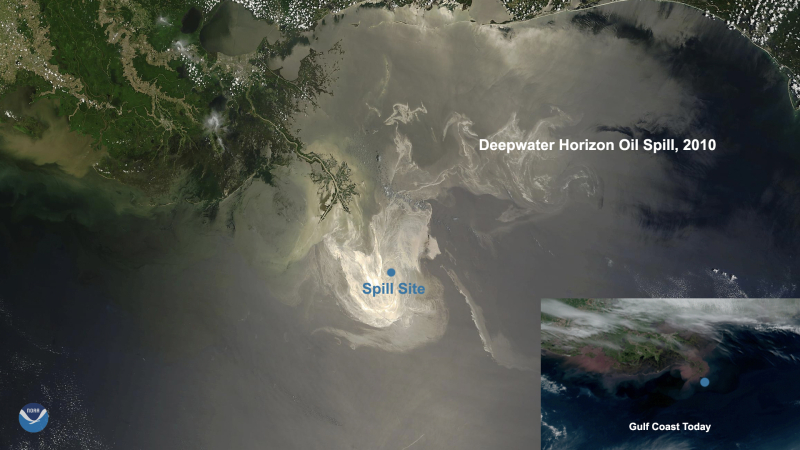 To continue to improve and expand its tools for disasters, in the mid-2000s, OR&R collaborated with its partners in NOAA’s National Environmental Satellite, Data, and Information Service to use satellite information for incident response and monitoring. OR&R saw the work of NESDIS’s Satellite Analysis Branch as an untapped resource for oil spill emergency response, and worked with them to develop the fledgling 24/7 satellite-based Marine Pollution Program.

These reports are also useful for long-term monitoring over areas of interest. For example, the U.S. Coast Guard relies on the routine data collected from NESDIS’s satellites over the longest U.S. oil spill site in the Gulf of Mexico, at the MC20 site. While a containment system is effectively capturing oil as it emerges from the seafloor at this ongoing release site, surveillance by NESDIS is used to monitor the site, detect for any unexpected oil slicks, and to help ensure resources are being protected.

Additionally, Marine Pollution Surveillance Reports support modeling efforts for the fate and transport of potential oil. During a spill incident, modelers often use information gathered from overflights of the spill area to initialize the trajectory model, WebGNOME. During the Deepwater Horizon oil spill, this new product became essential to initializing the location of surface oil because the size of the slick limited the ability of overflight observers to visualize the entire impacted area. Today, OR&R spill modelers routinely ingest these data when initializing model simulations.

One of the huge benefits of satellite imagery is its global impact. The satellite reports have been a significant part of NOAA’s support for some recent international spill incidents.

When the bulk carrier Wakashio ran aground on a coral reef in July 2020, NOAA’s technical expertise was requested for the government of Mauritius through the U.S. State Department and the National Response Team’s international assistance committee. Among the ways that OR&R assisted was by providing NOAA’s WebGNOME trajectory software, along with satellite analysis to help outline for the responders where they should watch for oil on the shore or reefs.

In May 2021, the container ship X-Press Pearl caught fire and, after 12 days, sank off the coast of Sri Lanka, damaging or losing overboard all of its containers, and raising concerns over the ship’s fuel and the hazardous materials on board. In addition, containers holding low-density polyethylene pellets ruptured, coating nearby beaches with the tiny plastic pellets. Providing technical support to the Sri Lanka government, OR&R provided and helped interpret NESDIS satellite imagery to monitor for any anomalies that could indicate the ship was leaking oil or other chemicals.

In February 2022, OR&R scientists were again asked to join U.S. National Response Team members in deploying to Lima, Peru to support the Peruvian government’s response to the release of nearly 500,000 gallons of crude oil into the maritime environment. NOAA was able to provide to Peru’s space agency, CONIDA, high-resolution satellite imagery, reports, and analysis—showing oiling extent and magnitude that was critical to emergency response operations.

The satellite reports produced by NESDIS are publicly available on their website. In addition, some of the NESDIS event-specific map products have been made available on the website of The International Charter Space and Major Disasters. The International Charter is composed of space agencies and space system operators from around the world who work together to provide satellite imagery for disaster monitoring purposes.

The tools that OR&R has developed or collaborated on over the years have gone far beyond their initial versions, and are serving critical roles in the response to oil and chemical spills and other disasters, both within the U.S. and around the world.