The ‘Little Extras’ in Preparedness: ‘Fun Food’ and an Old MRE Memory

This week, during National Preparedness Month, OR&R is taking a closer look at some of the disaster response roles our office and its partners serve in being prepared for both natural and human-caused disasters. In today’s blog, read a first person account of an OR&R scientist’s experience preparing for and living through disasters, and how the “little extras” in preparedness can make a difference.

A couple of years ago, my daughter called me from where she now lives in Austin, Texas. A hurricane threat was approaching the Texas coast — though I don’t remember which hurricane it was.

In an excited voice, she said to me, “Dad, the people here don’t know what to do for a hurricane.”

Austin is some distance inland, and the population of Austin is booming with people from outside the Gulf of Mexico area — many who moved there for jobs in computer technology. At the time, I’m sure a lot of them had never been through a hurricane.

“What do you mean people don’t know what to do for a hurricane?” I ask her.

“They just don’t know to fill your car with gas and make sure that you have plenty of water, dog food, and fun food. I’m at the grocery store, and there is like hardly anybody here and still plenty of everything,” she said. “Dad, something just seems wrong.”

We both laughed. She had lived through so many storms and seen so many empty store shelves and pre- and post-storm chaos, that it just didn’t seem right. She might not have been fully prepared in her new Austin home, but she knew what to do. Even if you have a full pantry, there is always that urge to go to the store and buy something else when a storm threatens.

My daughter refers to fun food, what others would call comfort food, and I know she is talking about items like chocolate, fancy popcorn, potato chips, brownies, crackers and cheese, a couple of bottles of wine — things that you might not stock as emergency supplies, but really do make you feel better as you wait out the storm or wait for the power to be restored. Storms are stressful events, and the longer it is before there is a return to a more normal day-to-day life, the more stressed and worried many will feel.

Science has shown that our mental attitude is important for our physical health. Just like the expression of being “sick with worry.” Science has also shown that food, often foods high in sugar or foods that remind us of happier pastimes cause our brain to release chemicals that actually make us feel better. Comfort foods subconsciously help us to feel less stressed, less worried, and less depressed. Eating junk food will often make us feel better – mentally and even physically. It doesn’t have to be junk food to be a comfort food, a fun food, or a happy food. It really works. I know from personal experience. I know that certain foods always make me feel happier, especially in a post-disaster world. I could provide you my list and yours would be very different, but everyone has those few special extras they turn to for comfort.

The value of comfort food is well known. The military learned a long time ago that soldiers living in remote areas without access to cooked meals, often under stressful situations (such as in times of war), benefited from having a few special items included in the individual ration packs. These are often different candies, coffee and other instant drinks, and sometimes even mini bottles of Tabasco sauce. None of these items are needed to sustain the physical health of a soldier, but they remind them of a better time and place, and that little something extra seemed to make the meal a little more special.

Meals Ready to Eat (MREs), the same meals given to our soldiers in the field, are commonly passed out as disaster rations distributed to the public (picture). Most of them are pretty good food – all are high in calories, but they sure taste good when you have nothing else. When I was in the military during the Vietnam Era, MREs were boxed can foods called K-rations.

Where I come from, we call a little something extra “lagniappe” — a word adapted from the Louisiana French that means “something given as a bonus, or an extra gift.” The older K-rations had a little lagniappe even if it was only a small package of chewing gum. I’ve eaten more than a few MRE’s over the years when they were available.

After the First Gulf War in 1991, Iraq’s army sabotaged more than 600 oil wells as they retreated from Kuwait. Not only was Kuwait devastated by the war, the environment of the entire region was under a heavy, black cloud of oil pollution. Oil droplets rained from the sky. OR&R and other NOAA offices responded to the disaster. I was flown into Kuwait on a small U.S. Air Force transport called a C-12. The shooting war had ended, but the destruction and the burning oil remained.

There were things that I saw during that deployment that I will never forget (things that I would like to forget, but that’s not what this blog is about). One day, I was sitting alone in the middle of the Al Burgan Oil Field surrounded by hundreds of oil well fires in an oil stained SUV. Like this day, most days I worked alone. It was about noon, but it could have just as easily been midnight as the sun was completely blocked by the heavy, thick, black smoke. The only illumination was that provided by the burning oil wells. In places the sand actually burned like an open range fire from all of the oil that had rained down and then caught fire. The fires also generated a huge amount of heat. 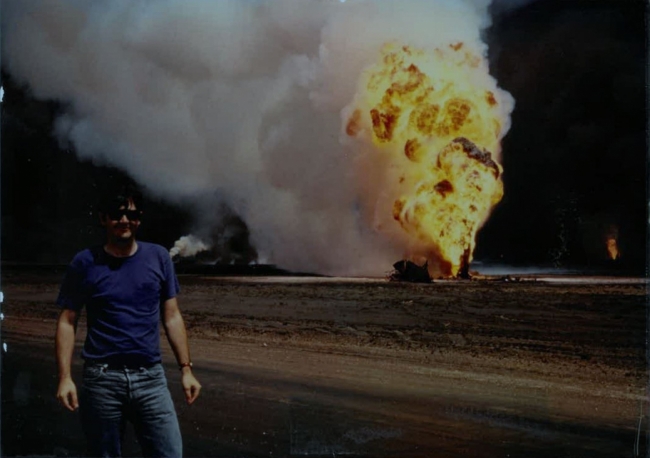 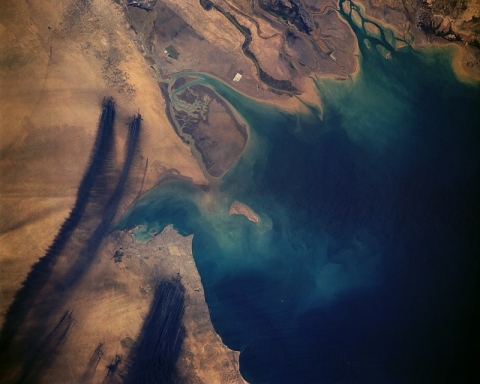 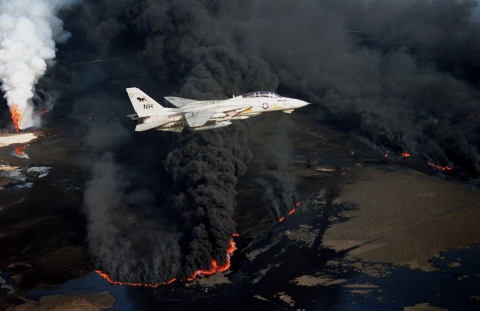 There was nothing good or happy about where I was at. The world that surrounded me was so unreal – pictures can show the smoke and fire, but pictures cannot show the feeling of being there. The excitement had long past. I don’t think that I had ever felt so far from home and my newborn daughter (yes, the same daughter that now lives in Austin).

Inside the SUV with the engine running, the air conditioning protected me from the outside heat. The instruments that I had deployed were collecting data about the air pollution  — deployed up wind from the vehicle. As I waited, I decided to have lunch, and lunch was almost always an MRE and a bottle of water. Soda, like a can of Coke, if you could find it was hot and a single can cost 1 Kuwait dinar, or about 3 U.S. dollars. MREs and water were provided free by the U.S. military, but there were times that I really just wanted a cold soda.

You might think it strange, but this is actually a good memory. I remember that day and my surroundings as if it were yesterday. It’s funny, I can remember an MRE that I ate 28-years ago. It was spaghetti and meat sauce. That simple brown package of SUV-temperature spaghetti, eaten in what might be described as a real-world hell, made me smile. As I sat there eating, I thought about my wife’s spaghetti and meat sauce. I’ll not say if I thought hers was better or vice versa, but I thought about my wife. I probably teared up a little. I remember that I would be going home soon.

For the rest of that day, I was a bit happier despite being in a war destroyed country on the other side of the world from my wife and newborn daughter. Comfort food can do that – it can make you feel better. There was also a candy treat in that MRE – probably a small package of M&M’s, but just what it was I have forgotten.