A Sense of Urgency in the Bering Sea

This week, we’re sharing some of the ways NOAA monitors and predicts, responds to, and prepares for the impacts of climate change. In this guest blog, Alaska Sea Grant is a coastal community resilience specialist Davin Holen writes about the impacts climate change has on native communities in Alaska. (Read more climate stories here).

The Bering Sea Region of Western Alaska is rich in resources and culture. For thousands of years, Alaska Native people have hunted and fished, relying on the natural abundance of the land and sea to sustain traditional ways of life, even into modern times. The Bering Sea is a diverse and abundant region of Alaska, and residents harvest a high diversity of resources as part of the subsistence way of life. Wild resources such as salmon in the Bristol Bay region are highly abundant, while in the Yukon-Kuskokwim Delta Region, migratory waterfowl and freshwater fish are also important in addition to salmon. In the north along the Arctic coast of the Bering Strait, residents hunt for marine mammals including seals, walrus, and whales.

A study by the Division of Subsistence at the Alaska Department of Fish and Game found that in 2017 the average per capita harvest of wild resources (pound edible weight) for the Bristol Bay region was 210 lbs, in the Yukon Kuskokwim Region it was 379 pounds, and in Arctic communities such as those in the Bering Strait this increased to 402 pounds per capita. That means an average family of four harvests 1,600 pounds of wild food each year!

These communities have always been resilient and adaptive. But building resilience in communities with modern infrastructure poses challenges. There are 56 communities in the Yukon-Kuskokwim River area alone, one of the most populous areas of rural Alaska, that are only connected by air, trails, and winter ice roads. Winter storms frequently limit air transportation, limiting a steady supply of not only food and household goods, but materials, supplies, and parts to keep infrastructure functioning. Add to this the impacts of climate change and the challenges increase. 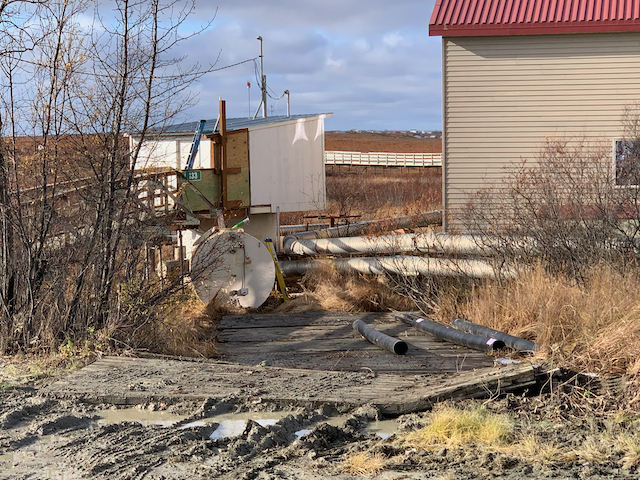 In the past during the fall, ice formed early along the shoreline of Bering Sea communities from Bristol Bay to the Arctic. This layer of ice protects the communities from the open sea, and wind and wave action. Recently, however, the ice is forming later, yet the storms are still present. As the active layer of the permafrost thaws, coastal storms are eroding away soft soils at the coastline. Because much of the infrastructure including docks, gasoline and heating fuel tanks, schools, and other major infrastructure are located along the coast, these community-level assets are washing away or being threatened by erosion.

In the community of Napakiak for example, located on the Kuskokwim River, a single winter storm eroded the coastline of the community by 75 feet leaving critical infrastructure exposed. Other communities such as Golovin have seen coastal inundation in the late fall-early winter as the ice is no longer stable along the coast.

The lack of sea ice also disrupts winter hunting activities. In the northern Bering Sea, walrus hunting and hunting for seals are common winter activities. With a lack of stable ice, hunters are wary of venturing out on the ice pack. One hunter remarked that in the past they could plan trips weeks in advance. Today, hunts have to be planned quickly when the ice conditions are just right. The weather has become unpredictable as most say.

Today, Napakiak is working with the Environmentally Threatened Communities program at the Alaska Native Tribal Health Consortium to plan their slow retreat away from the coast as funding becomes available. Golovin is working with the State of Alaska Division of Geological and Geophysical Surveys to map out potential coastal inundation so they too can plan where to move critical infrastructure. Examples of community-level planning and stories of resilience can be found at Adapt Alaska (adaptalaska.org) hosted by Alaska Sea Grant, which emerged from a collaborative of federal, state, university, and tribal participants in a series of workshops in the Bering Sea Region and other regions of Alaska. Across Alaska coastal communities are finding unique and innovative ways to build resilience and, in the process, foster better community well-being.

Residents of coastal communities in Alaska, especially in the Bering Sea, feel a sense of urgency due to the dramatic changes that are impacting their way of life and the need to build community resilience and capacity for response in the changing Arctic. With the retreat of the seasonal ice pack in the Bering and Chukchi seas in recent years, additional pressure in the form of increasing ship traffic and oil and gas exploration is impacting communities. Communities are also seeing an increase in cruise ships. 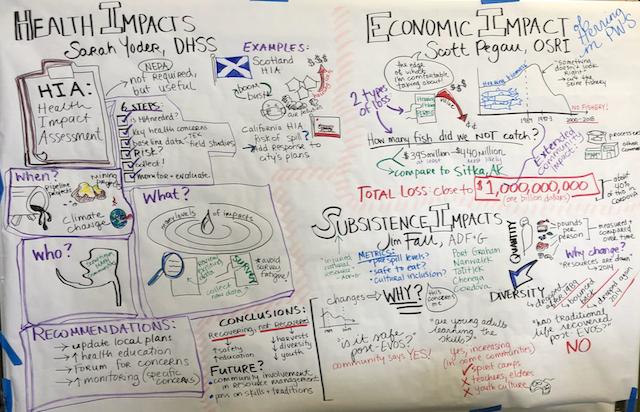 At a recent workshop focused on economic and social disruptions from oil spills in 2019 sponsored by Alaska Sea Grant, a group from the Bering Sea Elders joined the workshop. For the participants in the workshop, it was not a question of if a technological disaster occurs, but when. The Bering Sea fishery is one of the largest in the world with abundant non-salmon fish such as pollock and cod harvested, as well as an abundant shellfish fishery for crab. A technological disaster would have a profound impact on an area that is highly dependent on wild resources for the subsistence way of life, and a fishery important for food security for the nation.

Davin Holen is a coastal community resilience specialist for Alaska Sea Grant. He works collaboratively with the Alaska Center for Climate Assessment and Policy at the University of Alaska Fairbanks' International Arctic Research Center, and as a Sea Grant liaison is supported by and draws on resources from NOAA and the National Sea Grant program. Community resilience activities are highlighted on the Adapt Alaska website hosted by Alaska Sea Grant. Adapt Alaska is a collaborative of communities, tribes, agencies, and nonprofits to enable communities to adapt to rapidly changing ocean and climatic conditions and changing terrestrial landscape from Southeast Alaska to the Arctic.