How Do We Measure What We Lose When an Oil Spill Harms Nature?

This blog was originally published on April 5, 2016.

After oil spills into the ocean, NOAA studies the impacts to animals and plants, but we also make sure to measure the direct impacts to people's use of nature. This is all part of the Natural Resource Damage Assessment process, which makes up for those impacts. Humans can value environmental quality just for its existence (think of remote mountains and pristine beaches). In the Natural Resource Damage Assessment process, this "non-use value" is most often compensated for by replacing the natural resources or services that were lost.

However, people can also value the environment because they use it for recreational or cultural purposes. For example, people may be affected if they can't go fishing, boating, or walking along the beach because of an oil spill. When oil or another contaminant comes near shore, sometimes people will cancel their planned trip, sometimes they’ll change where they’re going, and other times they'll still take a trip but will enjoy it less.

Trustees of the affected resources, like NOAA, apply different tools to measure these recreational use losses (we’ll talk about cultural losses in an upcoming blog post). However, people may make one of these changes even if there isn't any oil present on the beach. Sometimes beaches or fishing areas may be closed because cleanup crews or environmental assessment teams are present. Other times, people may hear about an oil spill in the news and may change their trip based on their reasonable expectation that the oil spill will affect their trip in some way. 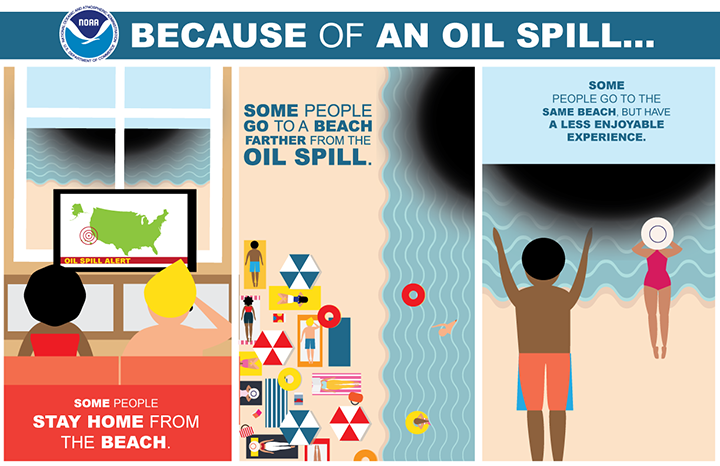 Thanks to the Oil Pollution Act, any one of these changes is an impact than we can quantify in the Natural Resource Damage Assessment process.

Counting How Much Less Fun

Under the Oil Pollution Act, people generally can file legal claims for two types of economic losses related to recreational use due to a spill. Lost revenue to local businesses, such as stores, restaurants, and hotels, is a private loss and is reserved for those businesses to claim. On the other hand, the lost value to the would-be hikers, boaters, anglers, and swimmers is considered a public loss and is the responsibility of trustees, that is, local, state, and federal agencies and tribes acting as stewards of the affected public natural resources.

To measure these public damages, trustee economists will count how many trips to the coast were affected by that particular oil spill and use information on where those trips were originating to measure the lost value per lost trip. Together, these two pieces make up the trustee claim for lost recreational use after an oil spill. To measure lost trips, trustees will often use on-site, telephone, or mail surveys in combination with on-site or aerial counts of people on the coast. Sometimes, we can take advantage of other data sources that already tell us how many people visit the coast, such as existing beach attendance data, parking meter counts, or recreational fishing surveys.

For example, after the 2007 Cosco Busan oil spill in San Francisco Bay, trustees performed on-site counts of people at some beaches, used a telephone survey to estimate the levels of use at others, and relied on the California Recreational Fisheries Survey to estimate trips taken by anglers. This information was combined with weather data in a statistical model to predict the number of people that would have taken trips if the oil spill hadn't occurred. The assessment estimated that there had been over 1 million lost trips. The lost value per lost trip is measured using economic models that combine information on where people live and which recreational sites they can choose from. Just like shopping at the grocery store (where you choose from lots of different products at different prices), recreators choose between lots of different access points, each of which has a different "price" (in terms of gas and travel time).

Using many observations of how many people choose which sites at which prices, economists can measure the recreational demand for each site. When a site is affected by an oil spill, this model can be used to determine the lost value to recreators. For the Cosco Busan oil spill, this approach estimated that the average lost value per lost trip was $18.25 (as measured in 2007 dollars). The goal of the Natural Resource Damage Assessment process is to compensate the public for the harm caused by a spill. After we calculate the lost value, the trustees aren't done yet. Using money from the entity responsible for the oil spill, we spend restoration dollars on projects that will benefit the very same users who were affected. A few examples of projects we have built include fishing piers, boat ramps, parks, and artificial reefs.

So, how important are lost recreational use claims to the Natural Resource Damage Assessment process? Here are a few approximate numbers from past oil spill cases:

As you can see, surveying how people use the environment is a critical part of this process. And although taking surveys can be annoying, they often times generate really useful data that economists get super excited about—and from which you can directly benefit. So, the next time you get asked if you want to take a survey, take the opportunity to make an economist happy and say yes. Learn more about the economics of Natural Resource Damage Assessment and the value of a good day at the beach (video).