This feature is part of a monthly series profiling scientists and technicians who provide exemplary contributions to the mission of NOAA’s Office of Response and Restoration (OR&R). In this month's feature, meet Amanda Dwyer — Knauss Sea Grant Fellow with the OR&R Marine Debris Program. 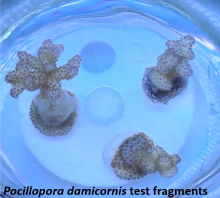 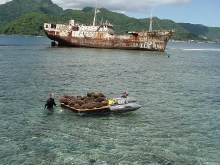 In December 1991, Tropical Cyclone Val struck American Samoa. It was the worst cyclone to impact the Samoan Islands since the Apia cyclone of 1889. Among the devastation caused, nine fishing vessels were grounded on the coral reef in Pago Pago Harbor on Tutuila Island, the largest and most populated island in American Samoa. About 1,500 gallons of oil was released into the harbor during the grounding incident. 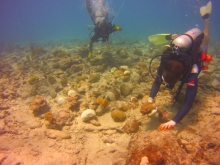 In December, NOAA received its second FEMA Recovery Support Mission Assignment to enable “U.S. Virgin Islands (USVI) Coral Reef Emergency Response and Restoration for Sustainable Ocean Economies, Food Security, and Storm Surge Mitigation.” In the aftermath of major storm events such as the 2017 hurricane season, NOAA often holds a seat at the table during mission assignments for federal natural resource recovery. Reef systems in these territories are vital to the ecosystem, mitigating damages to coastlines from waves and storm surge. 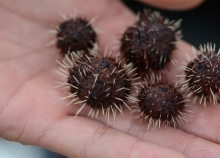 Can tiny sea urchins save a Hawaiian coral reef? In Oahu’s Kaneohe Bay, with a little help from scientists, it appears they can.

Kaneohe Bay has been plagued for decades by two species of invasive algae that blanket the native coral reefs, blocking the sun. The National Oceanic and Atmospheric Administration and partners developed two methods to destroy the invaders, vacuuming them up, and releasing hungry native sea urchins to munch them away.

The waters surrounding the Puerto Rico archipelago are known for the diversity and beauty of the coral reefs. Those reefs are also under great pressure from population density, land uses, and shipping traffic. 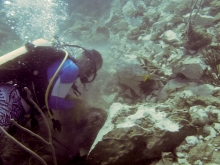 U.S. coral reefs are impacted by 3 ­- 4 large groundings a year.  On Dec. 15, 2009 the danger became reality near Guayanilla Bay, Puerto Rico when the liquid natural gas carrier Matthew grounded on the coral reef there causing substantial harm. It wasn’t just the grounding that injured the coral. During attempts to free the tanker the bow of the ship was moved from side to side causing further injury to the reef structure.