NOAA is the lead U.S. federal agency responsible for the conservation and protection of cetaceans (whales, dolphins and porpoises) and pinnipeds (seals and sea lions). Within NOAA, that role is delegated to NOAA Fisheries, but sometimes other NOAA offices are called in to help. In this instance, "helping" involved dealing with a stranded whale carcass.

When these giant animals die and wash ashore, there is important data to collect to better understand and manage their populations, and complicated logistics associated with the stranding itself. How and why did the whale die, and ultimately, what do we do with it after our investigations are complete? Often, whale carcasses are buried on the beach or towed offshore to decompose naturally.

But the next question often is, where (and how far out) to tow it so it doesn’t come back on the shore with the currents or next tide. To answer that question, NOAA Fisheries often reaches out to NOAA’s Office of Response and Restoration. OR&R’s Emergency Response Division uses its suite of oceanographic drift models (GNOME suite) to help decide where to take the carcass. These tools, built to forecast oil spills and other pollutants, can also be used to track marine debris and things such as whale carcasses. It is not an exact science, however, since whales drift differently than oil, and the models need to be tweaked to take into account the windage (how much of the carcass is above the water and subject to the force of the wind) versus the forces of the ocean currents alone.

Earlier this year, OR&R got a chance to enhance its models of whale drift. The project also engaged NOAA’s National Environmental Satellite, Data, and Information Service and other partners. On May 10, 2022, a large whale was reported as stranded alive in the Florida Keys, just northeast of Key West. The whale, a 47-foot male sperm whale, died and was towed to a local marina for necropsy (animal autopsy) by marine mammal stranding network members and supported by NOAA’s Southeast Fisheries Science Center. The necropsy revealed that the animal had likely died from an impaction of multiple pounds of fishing gear found in its stomach. After necropsy, the carcass was towed offshore and into the Gulf Stream for return to the environment.

This process provided an opportunity for the science center and NOAA’s Southeast Regional Office, with help from OR&R, to contribute to an ongoing research project led by NOAA Fisheries, in collaboration with the Naval Research Laboratory, the Bureau of Ocean Energy Management, and the British Antarctic Survey. The project has been exploring the development of an operational system to detect marine mammals from very high resolution (VHR) satellite imagery.

Recent research has demonstrated the feasibility of identifying whales from VHR satellite imagery with both manual and machine learning approaches. The machine learning approaches require the creation of a large standardized dataset of high-quality confirmed satellite images of whales—and that dataset is growing with the addition of opportunistically collected images of whales, including carcasses.

NOAA Fisheries marine mammal specialists in the region wanted to contribute to this image library of whales by partnering with the satellite service to task a VHR satellite to fly over the carcass while collecting pictures of the ocean surface. The tasking requires a 12 to 24 hour lead time, so a drift analysis forecast was necessary. The regional NOAA office contacted OR&R’s scientific support coordinator for that region with the known location of the carcass at the time it was released from the tow vessel and requested a drift analysis for less than 24 hours into the future. The drift analysis resulted in a rough location which was then provided to the team at the National Environmental Satellite, Data, and Information Service.

Unfortunately, by the time the analysis window came up, the satellite was no longer available for tasking, so no carcass photos were collected. Going through the process was good practice, however, and the fact that the carcass was released with a GPS location tag means that its actual drift path can be used to make the “whale carcass drift model” used by OR&R even more robust. 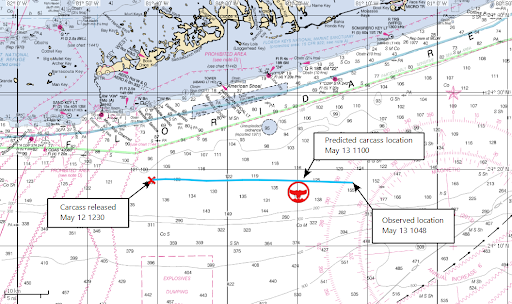 The figure shows the carcass release location (the red X) and the predicted location (the red whale icon) almost 24 hours later when the satellite overflight was expected. The blue line shows the location fixes for a tracking buoy that had been attached to the carcass. The predicted location was approximately 13 kilometers to the west of the observed location. In this case the Florida Current, with west to east maximum velocities of almost 1 meter/second, was the main mover of the carcass, and errors in the trajectory are likely due to the ocean model used to provide currents not getting the location of the Florida Current exactly correct.

After providing trajectory support for oil spills and other responses, OR&R’s oceanographers use feedback about the accuracy of their predictions to better tune their models and provide updated and higher quality predictions in the future. The continual incremental enhancements by NOAA and its partners will improve our ability to identify whales from VHR satellite imagery, and provide a better system for addressing stranded whale carcasses, when they occur.