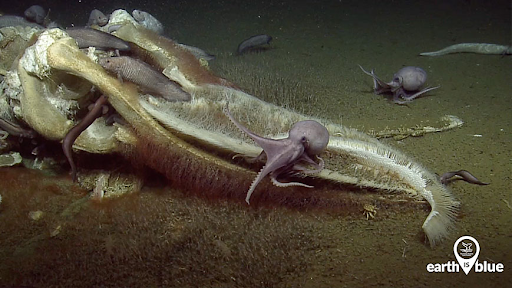 Sometimes, on dark and stormy nights, the carcasses of giants wash ashore.

When whales die at sea and sink to the ocean floor—a barren expanse filled by pale and bioluminescent creatures—their bodies create a feast where there was previously famine. Their carcasses nourish a wide variety of deep sea marine life.

However, when whales wash onto beaches they create a stinky and potentially dangerous hazard. After NOAA or local marine mammal experts have responded and investigated the cause of death, the next step is getting the carcass off the beach.

To do this, NOAA’s Office of Response and Restoration leverages modeling tools designed for projecting an oil spill’s trajectory to calculate where whale carcasses need to go to ensure they find their final resting place — in Davy Jones' locker.

Why Sink Whales in the Deep Ocean?

Whales are massive creatures. Humpback and gray whales grow up to 66,000 pounds. Blue whales weigh in at a whopping 330,000 pounds—the largest animal to ever exist on Earth. So removing a whale carcass presents a logistical challenge.

Over the decades, experts have tried different ways to remove whale carcasses. When a whale washed ashore in Oregon in 1970, responders experimented with explosives. Stuffing the carcass full of dynamite, they attempted to disintegrate it. Instead, chunks of dead whale blubber rained down on bystanders a quarter mile away!

Towing whales offshore and sinking them in the deep ocean is much less messy and nourishes the marine environment. However, unless responders are deliberate in selecting a location to dump the whale carcass, there’s a good chance that wind and waves will simply wash the whale back ashore.

While NOAA’s Office of Response and Restoration doesn’t help with every single whale carcass, we are increasingly called upon to use our scientific expertise to calculate models that keep whale carcasses sleeping with the fishes.

The Office of Response and Restoration uses a suite of tools known as GNOME (General NOAA Operational Modeling Environment) during oil spills. It estimates where oil may go and how the spilled oil might change (or “weather”) in the water. This allows scientists to deploy booms to protect sensitive environments, use skimmers and sorbents to clean up oil, and close beaches where oil will come ashore. 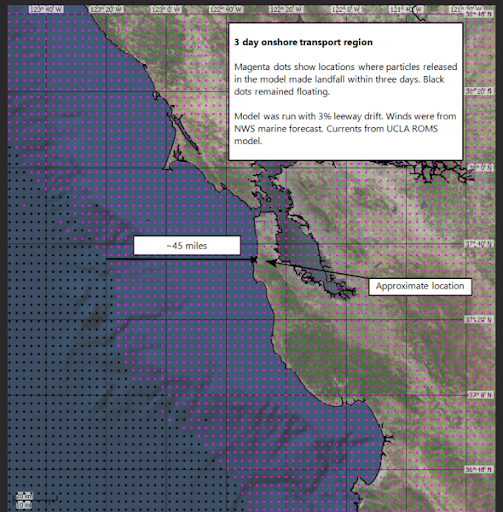 But instead of following the trajectory of oil that’s already in the water, oceanographers can run a multitude of trajectories to find the best location and distance from the shore to tow a whale carcass.

Winds and ocean currents are important factors to calculate the trajectory for oil spills and other objects drifting at sea. For whale carcasses, the state of decomposition and the amount of whale floating above the surface also influence how much wind will shape the whale’s movement.

By inputting these factors, modelers can use GNOME to produce a map that predicts where the whale carcass will travel over the course of several days. This allows them to determine where a whale carcass will need to be towed to ensure it never washes ashore again.

When oil spills in the ocean or a whale carcass washes up on your local beach, NOAA’s Office of Response and Restoration is ready to leverage our science and expertise to respond to scary scenarios. Each year, we respond to more than 150 pollution events and provide scientific support to many more.

From everyone at NOAA’s Office of Response and Restoration, Happy Halloween!

This article is very interesting and provides more thought into what NOAA can do to remedy this. Moved to the right locations where diminishing sea life habitat is occurring can help to rehabilitate the environment by providing food for that environment.