Beneath the Surface: Oil Spills and Mental Health

Oil spills can impact the environment and the communities in it in a variety of ways — from the deaths of the marine animals and wildlife that come in contact with the oil or polluted plants and water, to the physical damage seen throughout entire ecosystems. But not all impacts are visible with the naked eye. Some lie lurking beneath the surface and may not be apparent until months or even years later. Some of these impacts reside, not in an ecosystem or a body of water, but in the minds of the people closest to the incident. One of the impacts pollution has on people, is on their mental health.

The mental trauma experienced by people who survive an environmental disaster, such as an oil spill, varies in intensity based on the size of the disaster, their proximity and connection to the environment, and the scale of their exposure. These impacts have been documented in two of the largest oil spills in U.S. history — the 1989 Exxon Valdez oil spill in Alaska, and the Deepwater Horizon oil spill of 2010 that impacted the entire Gulf of Mexico.

Death and Violation in Native Alaska

On March 24, 1989, a tanker grounded on a reef in Prince William Sound, Alaska. The hull of the Exxon Valdez ruptured, spilling nearly 11 million gallons of crude oil into a remote, scenic, and biologically productive body of water. At the time of the spill, the Exxon Valdez disaster was the largest single oil spill in U.S. coastal waters.

The days, months, and years following this unprecedented spill event impacted people both in Alaska, throughout the U.S., and around the world. But perhaps the group of people who suffered the greatest loss and mental trauma following the spill were the Native Alaskans.

Native peoples account for nearly a fifth of Alaska’s overall population — their people and cultures stretching throughout the state, intertwined with the unique natural environment of the land and the waters that surround it. Home to several of Alaska’s tribal groups — including Aleuts, Athapaskans, Eskimos, Eyaks, and Tlingits — Prince William Sound offers many natural and cultural resources these groups look to for both survival and to uphold their way of life.

During the response to Exxon Valdez and the years that followed, sociologists continued to document the social and mental impacts of the spill. Among them was Kai Erikson, a sociologist and a professor at Yale University. In interviews with native Alaskan communities, as seen in “The Day the Water Died” written by fellow sociologists Duane A. Gill and J. Steven Picou, Erikson found that people were experiencing a broad range of emotions and mental trauma — from outrage and anger, to sadness, denial, and grief.

“People around here are closely related to the land and the ocean, so the death of birds and animals and seeing so much oil in the water has a deep impact on their lives. This is their home and it’s been violated,” said one interviewee.

“When you pick up these dead carcasses day after day, you go through a mourning process,” said another. “It’s not only death in your environment, but in a sense, it’s a death for yourself. Because you’re a part of the environment.”

A U.S. Department of the Interior study found that recovery for fishing and other activities relied upon by the tribes for subsistence took a long time to recover in Prince William Sound. With a decline in wild foods harvested in the village of Tatitlek and Chenega Bay from more than 600 pounds per person before the spill, to 225 pounds in 1989, and 150 pounds in 1990. By 1996, they had still not recovered to pre-spill levels. 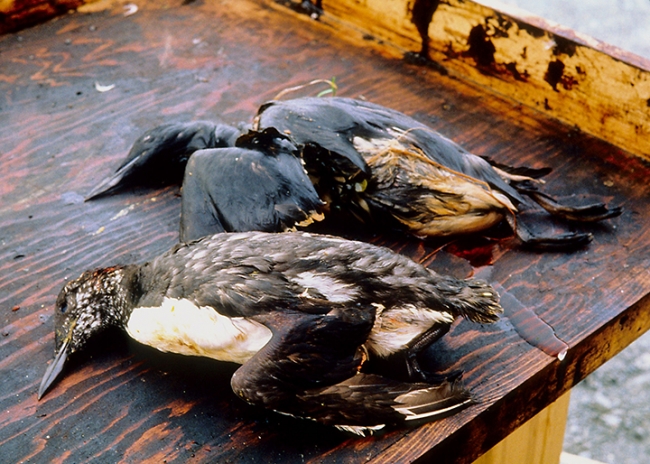 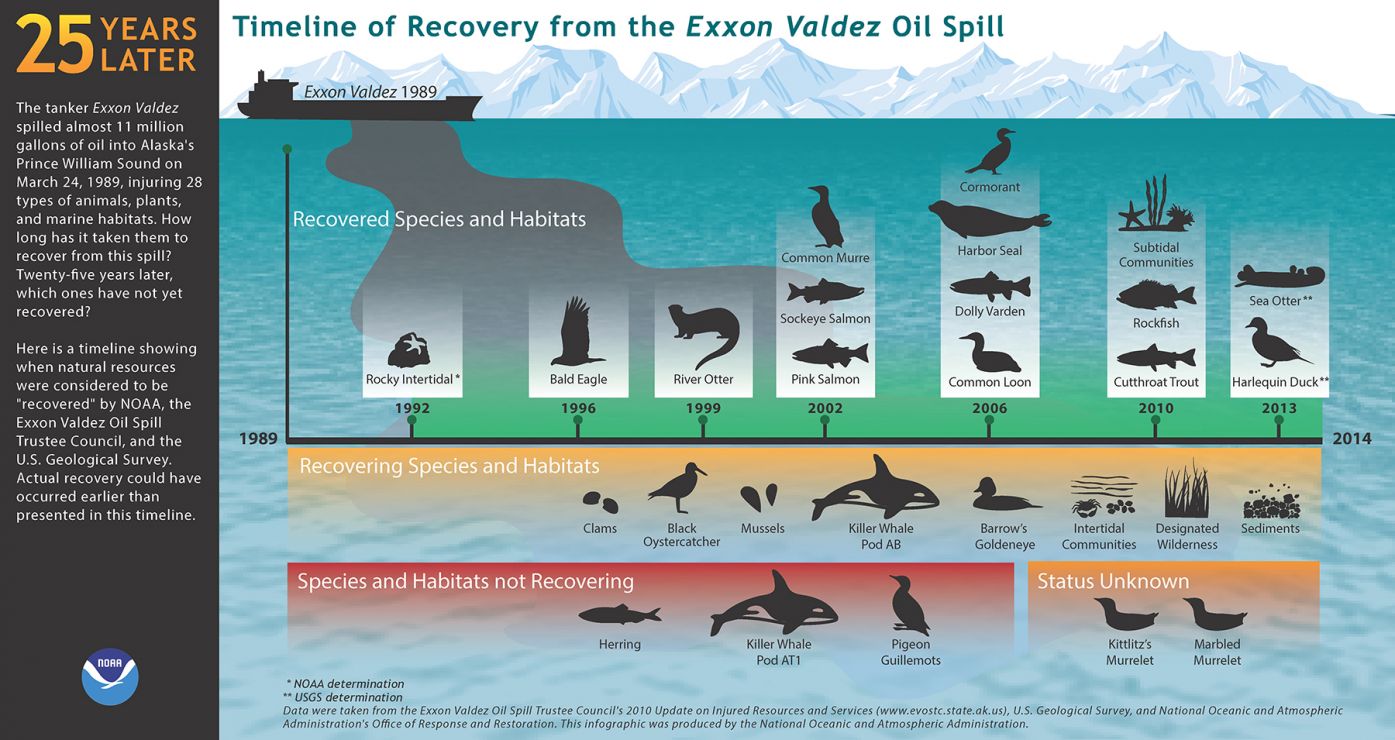 “This decline in subsistence, reliance on store bought groceries, and other economic hardships related to the oil spill increased personal and family friction and stress,” stated the study.

“Seals are scarce. When you go out on a boat, you seldom see seals or sea lions like before. Man, the water is just dead,” said one study participant. “Along eighteen miles of Knight Island where we used to harvest, I didn’t see even one. Now we have to go thirty miles by boat to find seals. We used to get them less than two miles from the village.”

In Kai Erikson’s interviews with Alaska Natives, he found the decline in subsistence harvesting also put a strain on the social relationships of the tribes.

“The oil spill has drifted people apart. We used to help each other. Before, these people were one big family, but after the oil spill I noticed the village—that it’s pulling away again, people started going into their own shell, and just pulling away,” an interviewee said.

An Unprecedented Reach for Trauma

Exxon Valdez was the largest oil spill in U.S. history until April 20, 2010 when the Deepwater Horizon oil rig exploded, killing 11 workers and releasing millions of gallons of crude oil into the Gulf of Mexico over a period of 87 days. Much like the communities in Alaska, those in the Gulf experienced similar mental health impacts. But in the case of the Gulf spill, most of the trauma surrounded not around the cultural and recreational resources of a community, but the resources valued most by an industry.

A 2017 Gulf of Mexico Sea Grant publication provided an overview of how individuals and communities coped in the aftermath of the Deepwater Horizon oil spill. Studies show that the spill impacted the mental health of coastal residents, including cleanup workers and those who relied on a healthy Gulf Coast for their occupations. People whose work, family, or leisure life was impacted by the spill were more prone to negative mental health impacts — with reports of depression, anxiety, and post-traumatic stress disorder.

Though the impacts decreased over time, depression, mental illness, and stress levels for the area were still above the national average two years after the spill. Though the oil may have no longer been visible, the impacts to the environment, human health, and seafood safety remained and would continue to prolong the mental health impacts.

The Gulf region has a strong presence of fishing, seafood, tourism, and oil and gas industries — all of which were impacted by the spill. Beaches and other recreational areas were closed. Areas for both commercial and recreational fishing were closed. Visitors canceled their vacations. Offshore drilling projects were at a standstill for six months. For the residents who relied on these industries for their income and livelihood, depression and anxiety were more likely due to a loss of income.

The fishing industry in particular took a long time to recover. State and federal agencies closed fishing grounds while they monitored the spread of the oil slick and tested seafood samples. Visual, sensory, and chemical testing of seafood samples kept federal waters closed until nearly a year after the explosion. And in Barataria Bay in Louisiana, state waters did not reopen until June 2015 because of oil contamination.

Even after important fishing grounds had been reopened, the fishing industry still struggled with concerns about the long-term effects on fish populations and whether consumers would believe that seafood was safe to eat.

“A year after the spill, scientists saw that residents in counties with strong ties to fishing were more stressed and more worried about their economic futures than people in counties with strong ties to tourism. The tourism industry appeared to be recovering after the spill whereas questions lingered about how long it would take the fishing industry to do the same,” the Sea Grant publication stated. 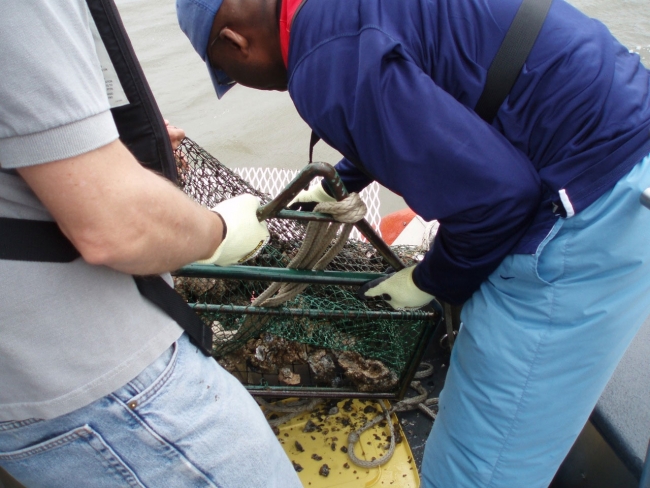 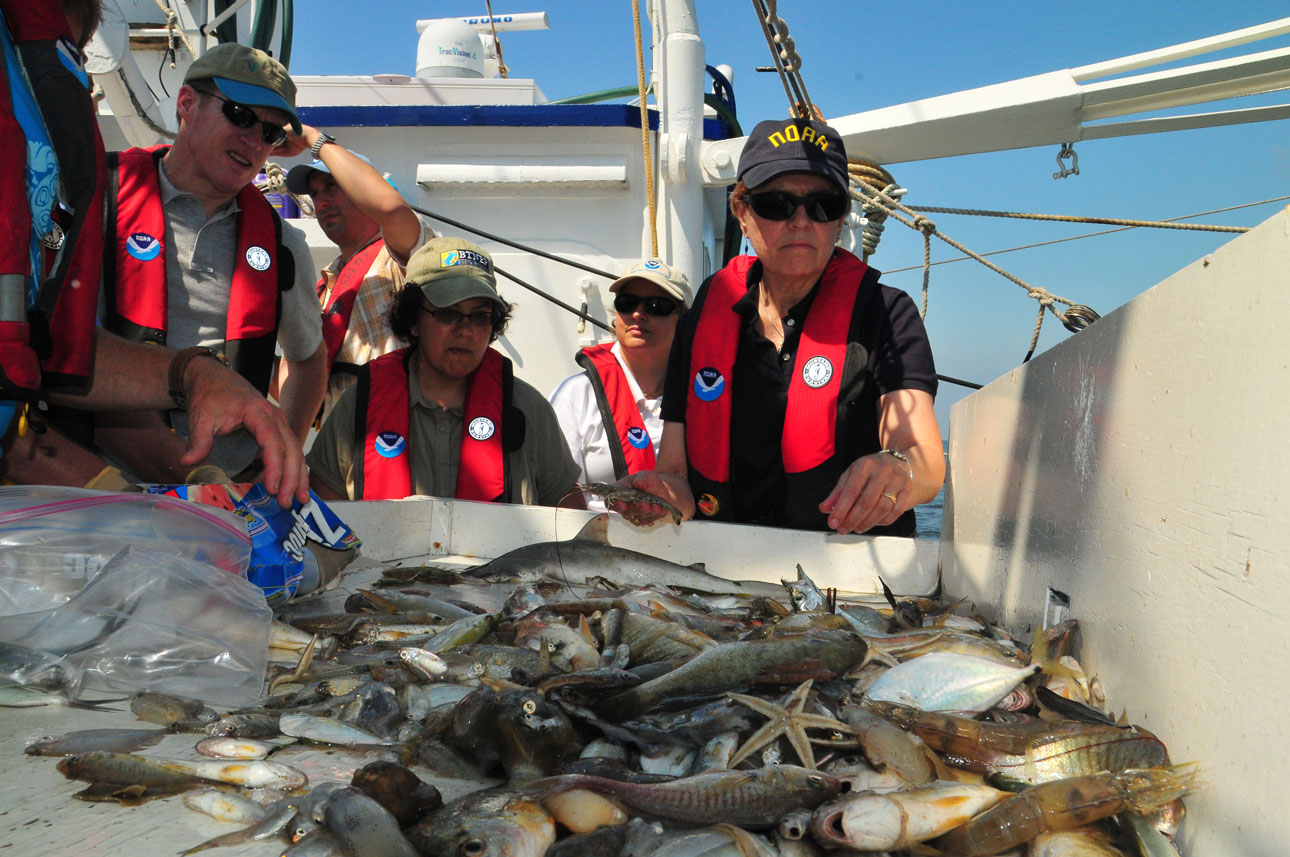 Learning From Past Spills

When responding to oil spills, scientists learn from their experiences and gain new techniques and understanding for responding to future incidents. This extends beyond the physical act of cleaning up after spills and restoring environmental damage, it also applies to how scientists predict and mitigate the impacts oil spills have on people.

During Deepwater Horizon, scientists frequently looked to Exxon Valdez as an indicator for the type and magnitude of impacts people might experience following the spill. But scientists also learned that — though these two incidents were similar in many ways — no two incidents affect people the same. While responders can look to the past for guidance, they must also make allowances for regional and cultural differences in the communities where they respond. For one community, the economic loss of damages to an industry may cause the greatest harm to people’s mental health. But for another, the damage to the land and water, and the absence of wildlife and marine life may prove to take the greatest mental toll.