A Case of Mistaken Identity: Can You Spot the False Oil Positives?

When asked what oil looks like, most people would probably describe it similar to molasses — black, and somewhat viscous in appearance. But did you know, crude oils can come in a range of colors? From black to red to yellow, oil can appear in a number of different colors and consistencies. This can make it especially hard to find and identify oil from the air.

In the image above, a range of colors can be seen at the site of a well leak in Bayou Perot, Louisiana. The oil that is closest to the source — visibly spraying out of the well — is yellowish. As the oil collects in the pollution boom around it, it gets thicker and becomes orange. And the thickest oil, collected to the far end of the boom, is black.

While different types of oils can vary in appearance, oil slick appearance is also affected by weather conditions and how long the oil has been out on the water. Though images of a heavy continuous coating of oil on the sea or shoreline might be the first thing that comes to mind when you think of an oil spill, that same spill could look quite different after a few hours or days.

Over time, oil can become patchy, it can emulsify, or become mixed with water. The color and consistency can change as the oil encounters other materials in the water, or simply the exposure to air. Even close to the source of the spill the colors can be quite variable depending on the thickness of the oil.

During a spill response, trained aerial overflight experts serve as the eyes for the command post of spill responders. They report critical information like location, size, shape, color, and orientation of an oil slick.

Because oil comes in such a wide variety of colors, it can easily be mistaken for something else — and vice versa. When searching by air, or even by satellite, responders can come across false positives for oil.

In this photo from a marina in Washington (right), this naturally occurring algae looks a lot like a reddish brown oil. When viewed from the air, algal blooms, boat wakes, seagrass, and many other things can look like oil. Important clues, such as if heavy pollen or algal blooms are common in the area, help aerial observers make the determination between false positives and the real deal. If the determination cannot be made by aerial observation, further investigation may be needed to properly identify the anomaly.

In the slideshow below, put your eyes, and your knowledge, to the test. Many of the images look very similar to oil — so much so that they required a second look to confirm their identity. Can you spot the false positives?

How did you do? Was there a particular false positive you struggled to identify? Share your thoughts and results in the comments below. You can also tweet us @NOAACleanCoasts or comment on Facebook @noaaresponserestoration.

To learn more and for training resources, visit the links below: 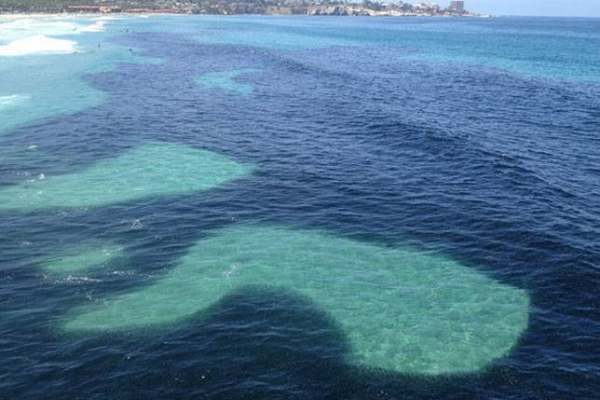 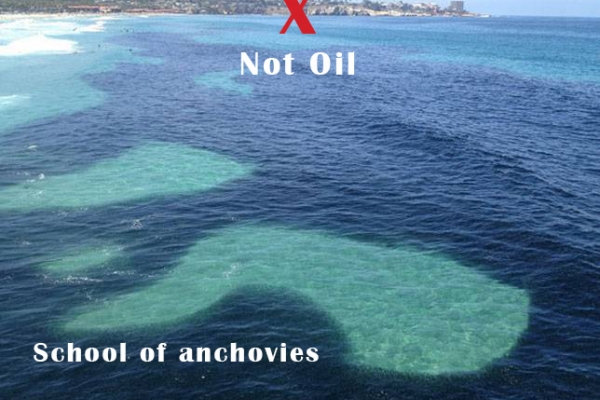 A huge anchovy school offshore of La Jolla, California. A dense school of fish along the shoreline can easily be mistaken for dark oil. Note that there is no sheen present and closer examination may show that the color is not on the surface, but subsurface. Image credit: Scripps Institution of Oceanography. 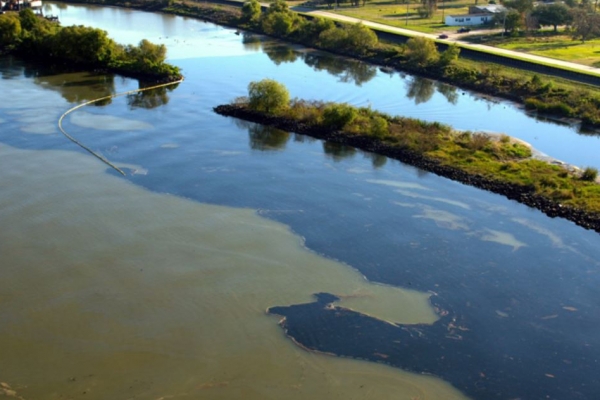 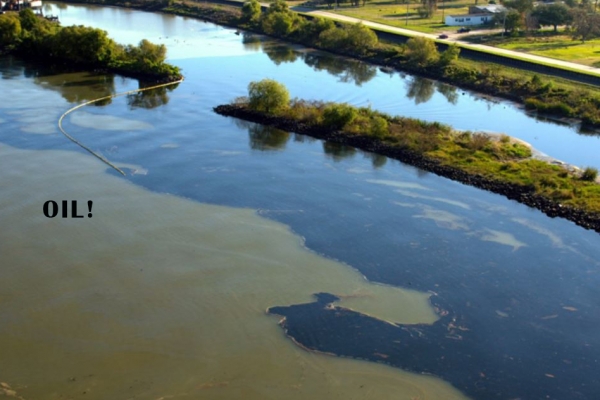 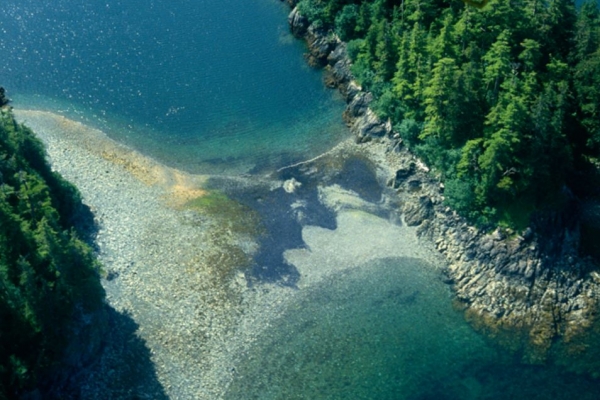 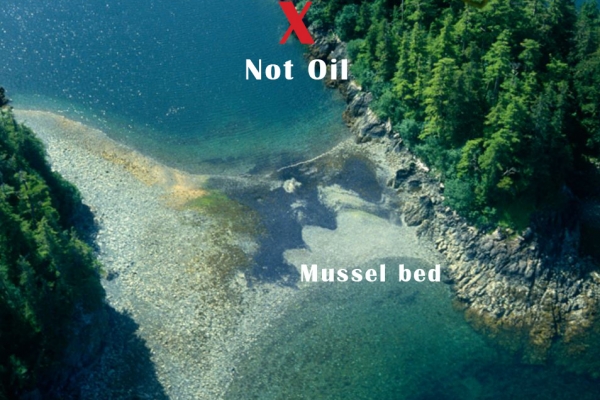 Mussel bed in Prince William Sound, Alaska. Mussels can form large dark beds in the lower to mid intertidal zone, typically in wave-washed areas. On a calm day, they can be mistaken for submerged or stranded oil. Image credit: Alan Mearns/NOAA. 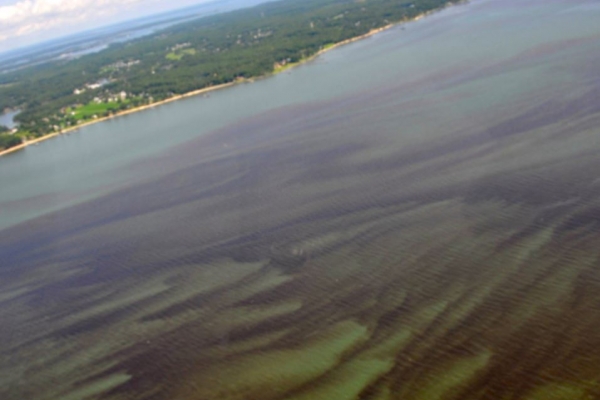 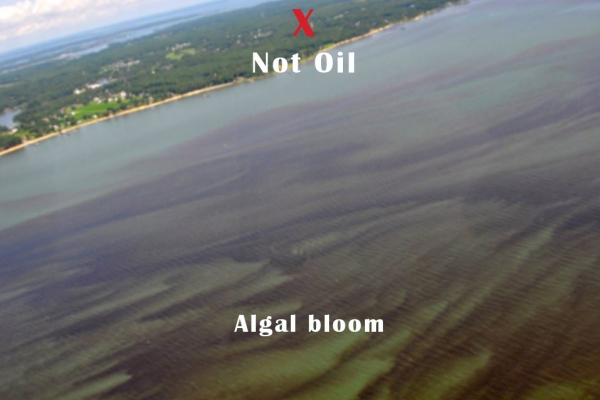 Algal bloom in Chesapeake Bay. Algal blooms are among the more difficult false positives. Depending on the algae, they form a wide range of colors and may appear at the surface or just below. Image credit: K. Reece/W. Jones/W. Vogelbein. 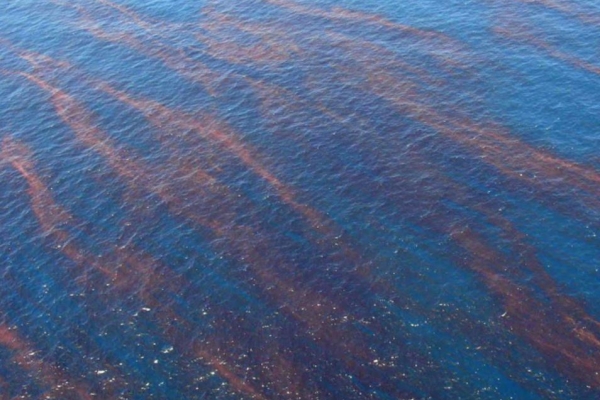 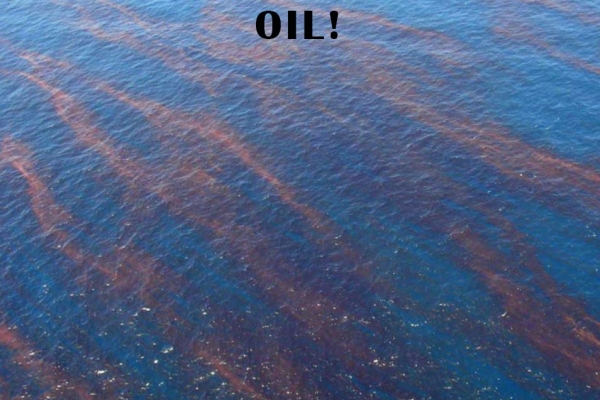 Emulsified oil in windrows during Deepwater Horizon. Windrows concentrate oil into bands, whether it's sheen or dark or emulsified oil. Image credit: NOAA. 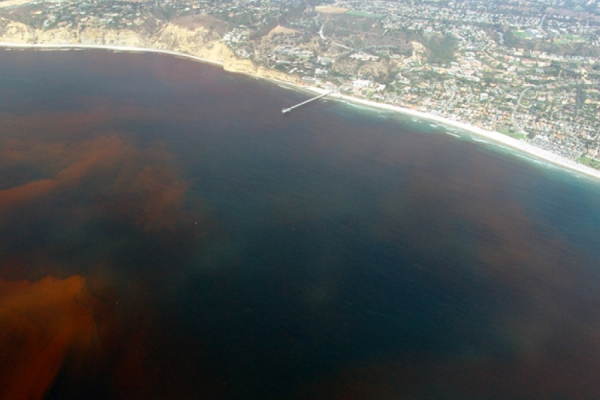 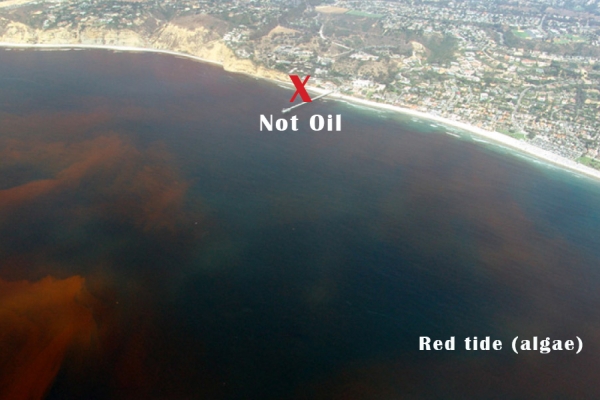 Plankton blooms, sometimes referred to as red tides, are commonly reported as oil. Color may vary from reddish brown, red, orange, to even light pink. In all cases, the plankton are not just on the surface but in the upper water column, which gives an appearance of a cloud in the water and not a sheen or a slick on the surface. Image credit: P. Alejandro Diaz and Ginny Velasquez. 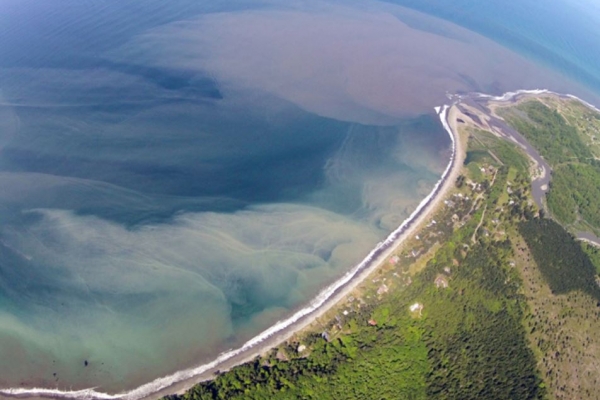 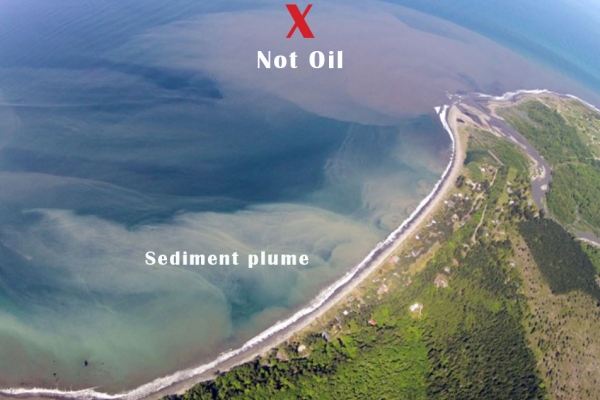 Sediment plume from the Elwha River in Washington. Sediment plumes can take on the reddish hue of emulsified oil. Image credit: Tom Roorda/USGS. 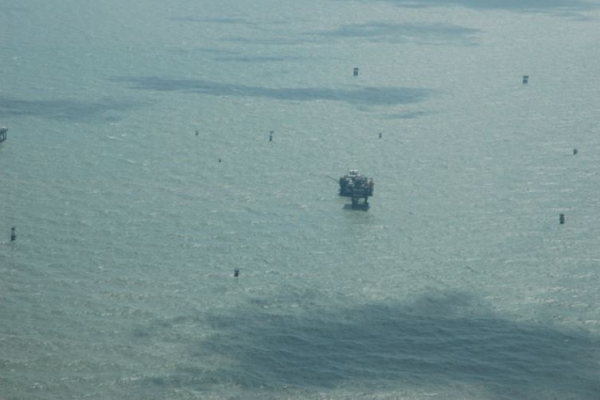 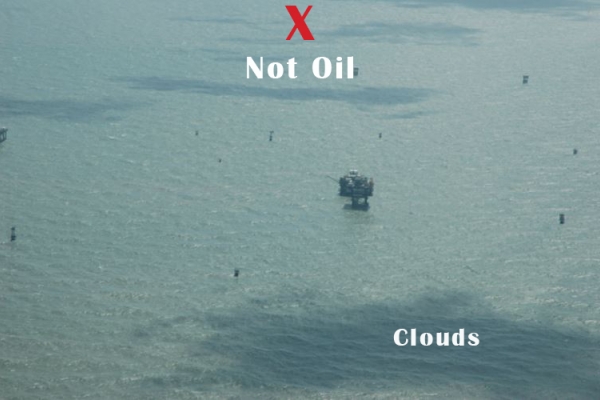 At times cloud shadows on water may have the appearance of oil. Inspect closely and check for sheens. 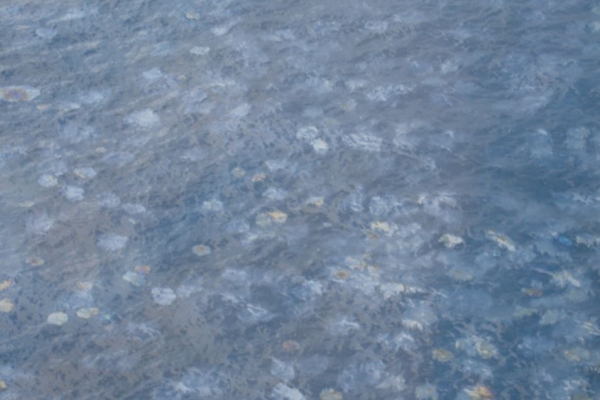 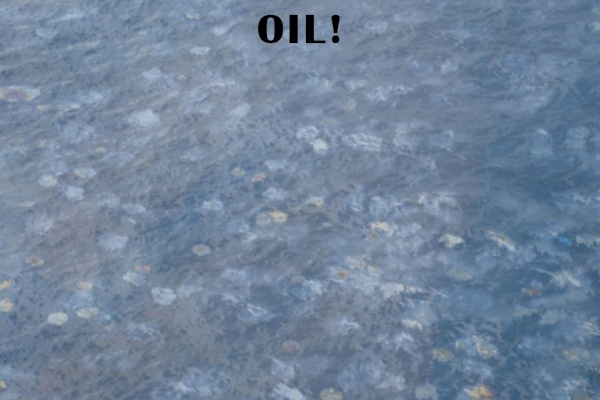 Patches of oil rising to the surface from the sunken tanker Solar 1, Philippines. Sometimes oil from a submerged source rises to the surface as a series of discrete drops that spread out or "blossom" into patches at the surface. Image credit: Ruth Yender/NOAA. 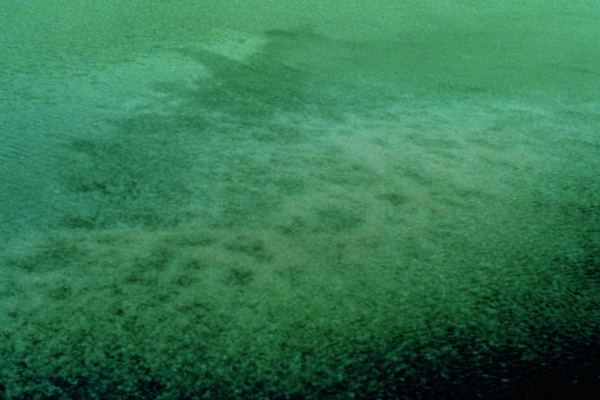 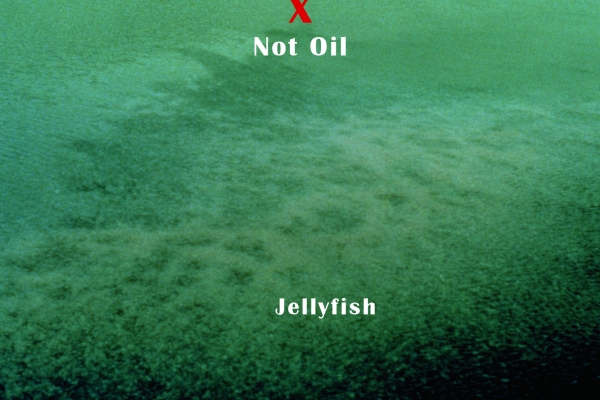 Large accumulations of Jellyfish (spring/summer) are frequently mistaken for oil. If in doubt, inspect more closely at a lower altitude. Most oil spills will have a sheen around the edges, helping sort out the spills from the false positives. 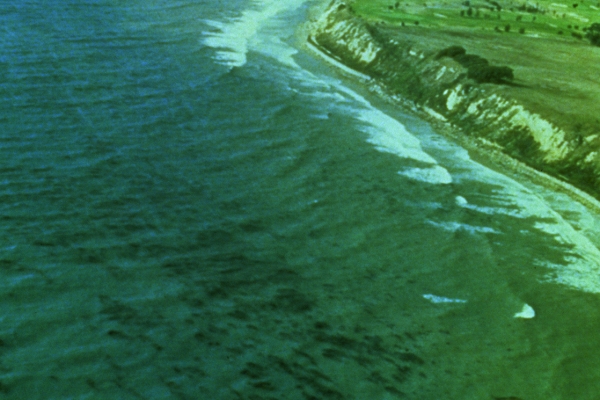 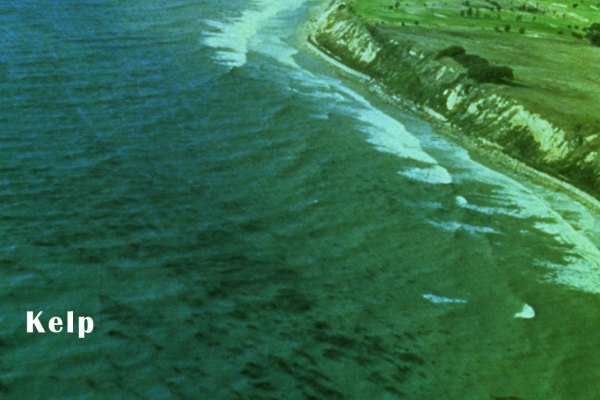 Kelp beds are frequently mistaken for oil. Sometimes kelp bulbs may be misidentified as tarballs.
1 of 22
Previous Pause Next
Click on the images in the slideshow for a larger display.
Tags
oil
oil spill ecology