The environmental toll from the 2010 Deepwater Horizon oil spill disaster was enormous, demanding a massive deployment of people and materials to measure the adverse effects.

Federal and state agencies worked quickly to scale up the emergency response, clean up the spill, mount a large-scale effort to assess the injuries to wildlife and other natural resources, and record how these lost resources adversely affected the public.

When the cleanup was finished, and the injuries were determined, another challenge came: NOAA and other agencies had to close down the largest damage assessment field operation in the nation’s history.

During five years of field studies assessing the injuries to natural resources, more than one hundred thousand samples were collected.

Instead of discarding the samples once the assessment was over, and the BP settlement was completed, it made more sense to find other uses for the samples, and the valuable laboratory, field, and office equipment attained during the assessment work. In many cases, the cost of finding new homes for samples and equipment was cheaper than disposal.

Repurposing samples and equipment: the work goes on

Shutting down the assessment operations involved clearing out laboratories and warehouses filled with samples, field equipment, and supplies.

In most instances, only a portion of each sample was needed for analysis and by the end of 2015, NOAA had an extensive trove of environmental samples.

Recognizing that many research scientists might put these samples to good use, NOAA made the materials available by publishing announcements in professional society newsletters. After receiving about one hundred inquiries, staff and contractors began distributing more than 5,000 samples.

Additionally, some sample collections were archived in publicly available repositories, with other historical and scientifically valuable collections. Thousands of samples of plankton, fish, and other organisms collected during post-spill trawls in Gulf waters went to a NOAA archive in Stennis, Mississippi.

The Smithsonian Institution in Washington, D.C. received rare deep-sea corals. Later this year the National Marine Mammal Tissue Bank will host thousands of samples from species of dolphins and other marine mammals found dead after the oil spill.

Universities across the United States received samples for research. Sediment samples sent to Florida State University in Tallahassee are supporting studies on the long-term fate of Deepwater Horizon oil deposited on Gulf beaches and in nearshore environments.

Researchers at Jacksonville University in Florida are using samples to compare the weathering of tar balls found submerged to tar balls those stranded on land. Additionally, researchers at Texas A&M University obtained samples of the spilled oil for studies of bacteria that biodegrade oil. 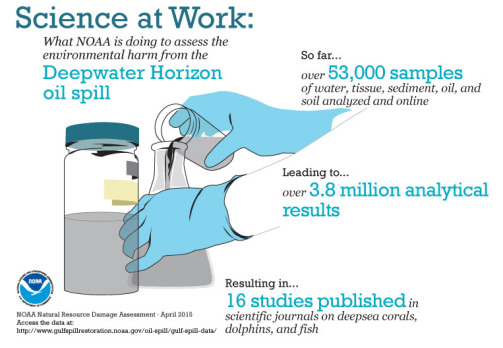 Finding new homes for scientific instruments and other equipment

Field samples were not the only items distributed to advance oil spill science. NOAA shipped hundreds of large and small pieces of equipment to universities and other research partners to aid ongoing investigations about the effects of oil spills on the environment, and the ongoing monitoring of the Gulf environment.

Repurposed supplies and equipment found a second life at many institutions including the:

In addition to laboratory equipment, some university researchers received practical items such as anchors, battery packs, buoys, forceps, freezer packs, glassware, preservatives such as alcohol and formalin, and thermometers.

NOAA coordinated with BP to recover and repurpose thousands of items BP purchased for the assessment. While clearing out office buildings and trailers, NOAA staff identified and requested valuable pieces of laboratory and field equipment, and other supplies. Some of these items, such as microscopes, initially cost tens of thousands of dollars.

All of which support preparedness for future incidents.

Countless NOAA staff rose to the enormous challenges of responding to, assessing impacts from, and restoring the natural resources injured by the Deepwater Horizonincident. This work continues, assisted by the creative reuse and repurposing of materials across the country to support ongoing efforts to advance oil spill science and improve preparedness for future spills.

Read more about and the work of NOAA’s Office of Response and Restoration and partners in responding to the spill, documenting the environmental damage, and holding BP accountable for restoring injured resources:

Greg Baker, Rob Ricker, and Kathleen Goggin of NOAA’s Office of Response and Restoration contributed to this article.