Each year during this time, NOAA’s Office of Response and Restoration (OR&R) takes a step back to examine the previous fiscal year in its 2017 Accomplishments Report. Fiscal Year 2017 was a busy year for OR&R, but even more so for the Emergency Response Division, which responded to a total of 205 incidents — a new record.

In a typical year, OR&R’s emergency response teams work on 150 or so spills and other incidents — averaging out to about three incidents a week. Spills and other marine accidents are tough to predict. Sometimes it’s quiet and other times we’ll get three calls in a single day. During the week, calls come to our small operations center in Seattle. Spills don’t take holidays, nor do they stick to a nine-to-five schedule; so our staff are on call and ready to respond 24/7.

With a total of 205 incident responses during FY17, ERD 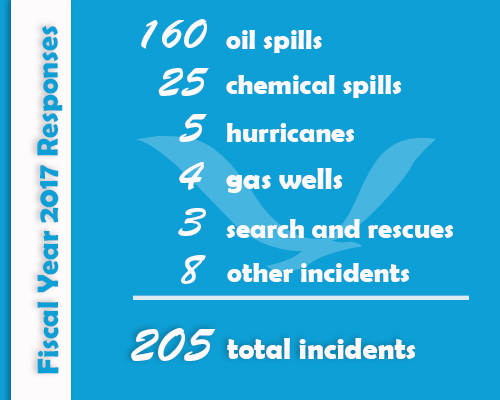 surpassed its previous record of 201 incidents from 2009. This new record breaks down to include 160 oil spills, 25 chemical spills, five hurricanes, four gas wells, three search and rescues, and eight other incidents. Not included, however, are the number of drills and exercises we support.

So what are the “other” incidents? We provide emergency support to the U.S. Coast Guard and other agencies when they need our oceanographic expertise. Some of those other incidents include tracking a dead whale carcass for our National Marine Fisheries Service, helping to look for a lost research float in the central pacific, and even working with the Coast Guard on establishing a safety zone for an active lava flow in Hawaii.

With a new record comes the question, “Why the increased number of calls?” and with it, “Does this mean more spills are happening?”

Quite the opposite in fact. We get called for incidents where our oceanographic and science experience is needed, which is typically on larger incidents — though large spills are fairly rare, and becoming rarer.

Our partners at International Tanker Owners Pollution Federation in London have noted a significant decline worldwide in the number of spills from tankers and other large ships over the past 20 years. Increased enforcement of laws and regulations in tandem with better navigation tools and ship technologies are just a few of the many factors contributing to the overall decline in the number of spills.

So if the number of big spills is declining, why are we getting more calls? This is perhaps due to increasing environmental concerns and a greater awareness that even a small spill can have significant impacts to our waters.

What does this mean for the future? For Fiscal Year 2018, we’re already off to a busy first quarter. During October and November we’ve already had 43 calls — putting us on track for another record year.

For more information on OR&R’s work during FY17, check out “2017 Accomplishments: The Year in Review.”