Living Sound: New Insights into the Acoustic World Under the Waves

During Whale Week (Feb. 10-14), NOAA’s Office of Response and Restoration is taking a closer look at the different pollutants affecting whales, and what OR&R and our partners are doing to help. In this guest blog by former NOAA Ocean Acoustics Program Director Brandon Southall, learn more about the vital role sound plays for whales and other marine life.

The ocean is far from the ‘silent world’ some have described from their bubbling dive helmets. Chorusing fish croak like frogs on a still pond in the moonlight. Whales’ booming calls rumble hundreds of miles, mingling with earthquakes, waves, even lightning crashes. Snapping shrimp crackle amidst pitter-patters of rain and whooshes of wind. Seals trill eerie alien trails under the ice, fluttering notes in dynamic, cascading song. Clicking dolphins flash blinking sounds, incessantly scanning the depths to find their way and their prey like spelunkers in a black cave.

From the massive to the miniscule, life of many forms and functions in the sea lives using sound. It is the central sense, the essence of surviving and thriving, for so many ocean mammals, fish, and even invertebrates. The dark, dense, and mixing ocean favors living sound signals and senses for communication over any appreciable distance. Nature has responded with a richness of calling and listening adaptations over the millennia rivaling anywhere on Earth.

Because of the vital importance of making and listening to sound for ocean animals, we’ve been faced with questions about how the noise of our industrialization, whether deliberate or incidental, could interfere. Could these sound-centric creatures be harmed by human noise? Could we impede their calling for mating or caring for their young? Could we be driving them from important feeding habitat or exposing them to predators? And importantly, if so, could we understand both how and what to do to minimize these unintended consequences and preserve our treasured oceans?

We’ve asked these questions for many decades and, thanks to ever-more sophisticated technologies and the dedicated efforts of many people from different scientific, management, conservation, and education perspectives, we’ve seen real progress and new insights.

A Spotlight on Sound

In the mid-2000s I had the privilege of heading NOAA’s Ocean Acoustics Program within the National Marine Fisheries Service (NMFS). Marine mammal strandings associated with naval sonar thrust the issue into the spotlight of public awareness and fueled scientific studies around the world. Laboratory studies on hearing and the effects of loud noises on hearing provided much-needed measurements that enabled us to begin developing noise exposure standards, much like those used in human factories to protect workers.

We began tackling the daunting challenge of using the limited but growing data to develop the first-ever hearing threshold criteria for any non-human taxa, in a process that evolved through the extensive efforts of the NMFS Office of Protected Resources into the current NOAA acoustic guidelines.

Simultaneously, field studies, initially coordinated between NOAA and the U.S. Navy began to carefully and systematically try and understand the behavioral responses of marine mammals to sonar — especially to beaked whales, an apparently most sensitive species. For nearly 15 years, we’ve studied these amazingly deep-diving, reclusive animals using experimental studies first with simulations of real sonar and more recently coordinated with full-scale Navy ship training operations to unravel how and why they respond. Thanks to the sustained and extensive support of science and monitoring by several U.S. Navy programs, including the Living Marine Resources Program and the U.S. Navy Fleet Monitoring Program, and the Office of Naval Research, studies have included these particularly sensitive beaked whale species whose strandings fueled much of the awareness of potential human noise impacts, but have also expanded to include endangered large whale species and even social dolphin species not thought to be sensitive but that are exposed to sonar incidentally in large numbers. These studies rely on partnerships between researchers from a range of disciplines, including colleagues from different academic and research institutions (including my own small business), as well as various parts of NOAA and the U.S. Navy.

Cutting-edge technologies have exploded the richness of our inquiry into increasingly complex and realistic issues regarding potential noise impacts. These include new developments in three-dimensional, high-resolution movement and sound-sensing recording tags integrated with longer-duration satellite-transmitting sensors applied in recent and ongoing behavioral response studies.

Some of the most important findings are that some species are inherently more sensitive than others, but that within species and even individuals there can be extensive variability, the reasons for which we are beginning to understand. We’ve identified the kinds of responses that may lead to stranding events if sustained. However, we have measured these carefully, safely, and ethically to deliver clear guidance about their occurrence and their implications to decision makers.

We’ve identified that many responses depend on contextual factors including what animals are doing, how sounds are positioned relative to them, and how their prey is distributed. Each of these revelations increase our ability to understand complex aspects of behavior, to more realistically predict when and how animals will respond, and to assess what these responses may mean in ways that directly inform responsible and effective management decisions. 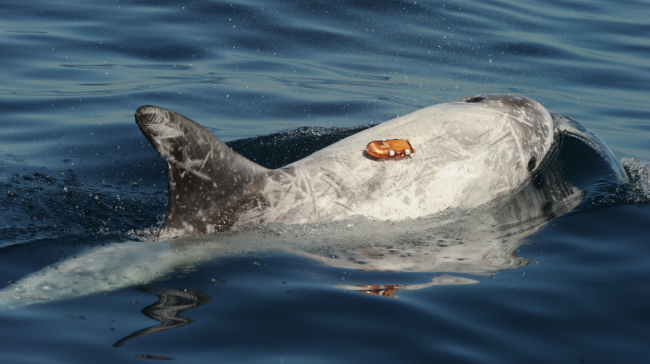 We’ve also seen tremendous advances in listening to the underwater soundscapes to better know when and where animals are, and even how many there are, as well as how human noise can contribute to sometimes already naturally noisy conditions. Our early efforts and recommendations with just a few bioacousticians in the agency over a decade ago within NOAA have blossomed into an array of integrated science and management programs. These now include dozens of world-class scientists across different offices spanning the agency, passive acoustics integrated into ocean observing systems, a multi-pronged ocean noise strategic plan, and new NOAA-Navy partnerships to strategically measure ocean soundscapes in many of our invaluable national marine sanctuaries.

What the Future Holds

Among our most important goals going forward must be the expanded awareness and appreciation of our ocean’s living sound within the general public, and especially young people. Those alien-like sounds of Weddell and leopard seals, the glumping sounds of toadfish, or the rumbling crescendo of an earthquake recorded underwater can trigger a fascination with ocean sound and its importance.

I’ve recently had the privilege of working with an interactive educational program for high school students led by the nonprofit California Ocean Alliance. This course puts bright young adults on the water, in research labs, on the necropsy table, giving hand-on experiences and directly engaging and empowering the young adults who will lead us into the future. Finding ways to connect and inspire the next generation of scientists, conservationists, and citizens in our changing world is among the most important things we can do. It is both an obligation and a privilege.

There are many challenges facing our oceans, including noise disturbance from ourselves. But we should remember that unlike some other impacts caused by humans that may be residual for long periods, noise is ephemeral. New technologies and solutions can help us restore and protect some of our living ocean soundscapes. There is certainly still so much more to unveil, but the progress I’ve been so lucky to be a part of in this pivotal two-decade period for the ocean noise issue has been simply remarkable. This has been a golden era of discovery for living sound in our living sea.  By building on recent scientific advances, new partnerships and new technologies, and by empowering the next generation, there is certainly reason for hope.

Brandon Southall, formerly the director of NOAA's Ocean Acoustics Program, continues to work on developing systematic noise exposure criteria and acoustic guidelines for marine mammals as a research associate with the University of California, Santa Cruz, and the president and senior scientist of his own research and consulting business. Southall is also an adjunct assistant professor at Duke University.

For more Whale Week blogs looking at the pollutants that threaten whales, and what NOAA and its partners is doing to help, visit our website.