By Frank Csulak, NOAA’s Office of Response and Restoration 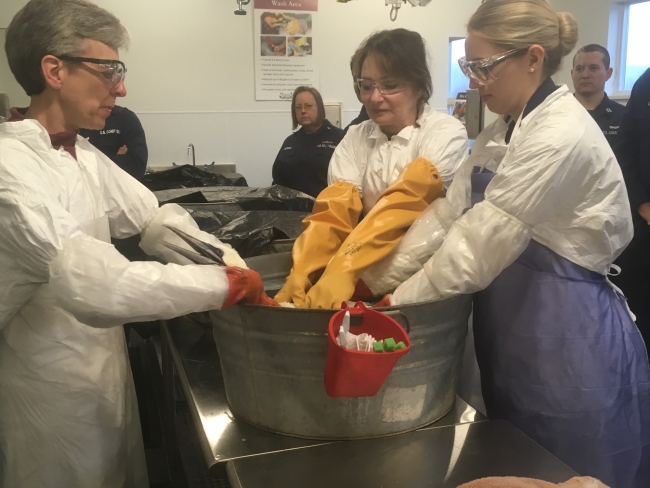 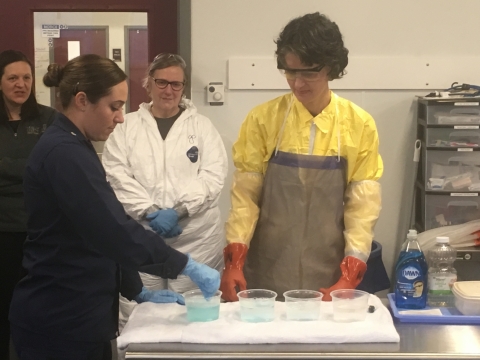 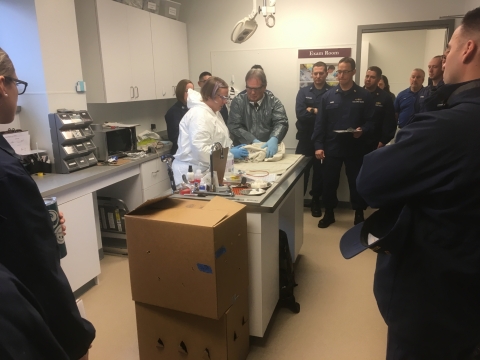 As a scientific support coordinator (SSC) for NOAA’s Office of Response and Restoration, one question that I always get from friends and family is: “Is it true that Dawn dishwashing detergent is used to clean oiled wildlife?”

Earlier this year, I had the opportunity to see a demonstration on how the organization cleans oiled birds during a tour of their Oiled Wildlife Response Annex located in Newark, Delaware. Arranged by Dave Pugh with U.S. Coast Guard District 5, the tour included responders from both NOAA and the Coast Guard.

Oil Spill Response Coordinator, Danene Birtell,  began the tour with an introduction to Tri-State and its history, which dates back to Dec. 26, 1976, when the Liberian tanker Olympic Games ran aground in the Delaware River. It was the sixth major oil spill in a three-year period and despite the efforts of many people, thousands of animals died because little was known about helping oiled wildlife. As a result, Tri-State Bird Rescue and Research was founded in 1977 to study the effects of oil on birds and to find a way to successfully treat wildlife.

Since its founding, the nonprofit has made great strides in the specialized fields of oiled wildlife responses and wildlife rehabilitation and has earned an international reputation, working together with industry, government agencies, colleagues, and a dedicated community of volunteers. Tri-State has been responding to oil spills for more than 40 years and has provided oiled wildlife support for such incidents as the M/V Treasure in South Africa, the mystery spill in San Mateo, California discovered to be caused by the S/S Jacob Luckenbach in California, the Athos I oil spill on the Delaware River, and Deepwater Horizon.

The organization's Wild Bird Clinic is one of the largest of its type in the United States, and handles the rehabilitation of birds not only from the region, but also from elsewhere within the United States, with the aim of eventual release to the wild. The facility operates under federal and multiple state permits, and is staffed by both veterinary staff and volunteers. This clinic handles more than two thousand birds annually and is currently housed within the Frink Center for Wildlife. In addition to oil spill response and bird rehabilitation, the staff and organization also publish papers and journals, and provide workshops and training for affiliate and local personnel from other organizations and agencies elsewhere. Made up of experienced wildlife veterinarians, biologists, and oil spill response personnel with extensive response experience and rehabilitation skills, Tri-State’s Oil Spill Response team is on call 24/7 to help oiled wildlife along the Delaware River, across the United States, and internationally.

In 2014, Tri-State opened a new building that is beyond the current state-of-the-art. At nearly 10,000 square feet, the Wildlife Response Annex “will allow wildlife cleaning and treatment on an unprecedented scale,” said Danene Birtell, Oil Spill Response Coordinator. “It also has space to train responders, veterinarians and other rescue partners – and isolate sickened wildlife if necessary.” With the exception of sea mammals and sea turtles, the Annex is able to handle all kinds of birds and other wildlife from anywhere within a five-hour drive according to Ms. Birtell.

The annex offers many special features to meet the needs of oiled wildlife and contains a full medical facility, in addition to the wash and office areas. The plumbing was designed to provide the consistent water pressure and temperature that the washing process requires. The entire floor of the wash area is grated with a drainage system below it. From the drainage system, water is directed into underground waste tanks for removal.

As part of the tour, Tri-State veterinarians provided a first-hand demonstration of the process for cleaning oiled wildlife using a deceased Northern Gannet, one of the largest diving seabirds that lives in the North Atlantic. During the washing process, Tri-State uses varying concentrations of dish detergent based on the sensitivity of the species and degree of oiling to remove oil from wildlife. Once the patient has been washed to remove contaminants, it is moved to the rinse area to remove all remaining residue from the wash process so that the animal’s waterproofing can be restored. The rinse area, like the wash area, features grated floors with a drainage system. When patients arrive, they are brought into the medical treatment room for a full examination and initial stabilization treatments. After the patient has been washed and rinsed, it is then placed in the drying room adjacent to the rinse area. The flexible design of the room allows the staff to set up different types of dryers to meet each patient’s needs. The annex also contains a pathology lab where blood samples can be analyzed and necropsies performed. Close to the medical areas, a full kitchen and walk-in refrigerator/freezer unit complete the treatment and rehabilitation areas of the annex.

Though the demonstration provided a closer look at the work Tri-State does, I have also seen first-hand the wonderful work and care that this organization provides during actual oil spill responses. Most recently, I worked with Tri-State during the May 2017 OCEANA jet-fuel spill that occurred in Virginia Beach, Virginia. Just about all of the NOAA Scientific Support Coordinators across the country have worked with Tri-State during an oil spill response or training exercise. 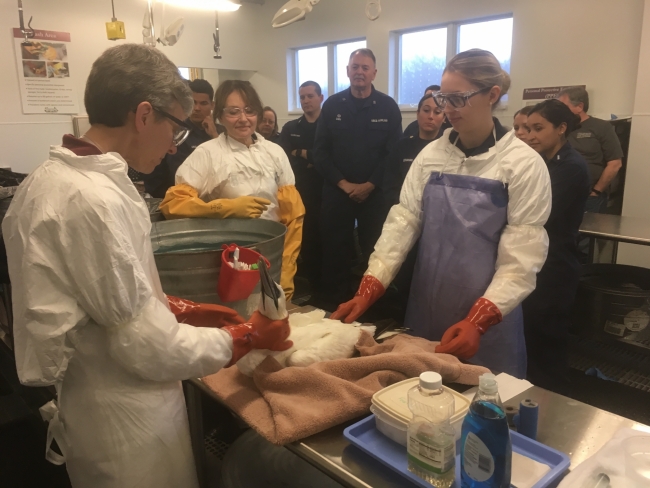 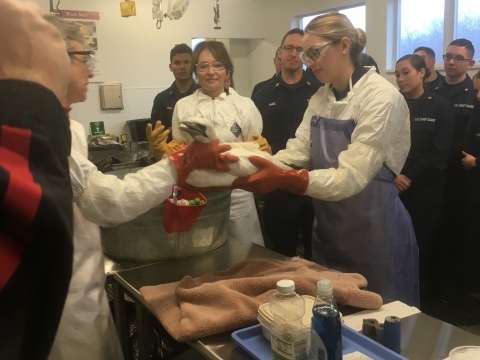 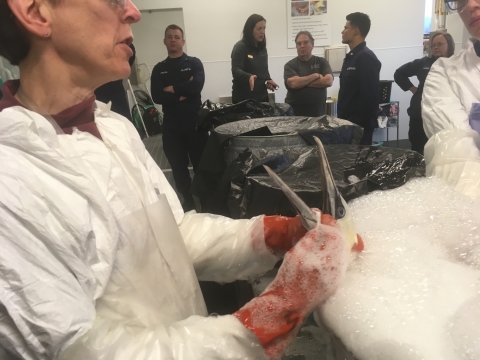