When Oil and Coral Mix: Seeking a Better Understanding of Toxicity

During an oil spill response, it’s important to understand the unique needs and sensitivities of the natural resources at risk. This means determining whether specific coral reefs in the possible path of drifting oil can sustain potential exposure, or whether they should be a priority for protection during a response.

When responders are first preparing to handle a spill, they take a look at the resources in the area and ask a number of questions to determine a course of action. What could be impacted? What resources can bounce back from the impacts, and what resources likely wouldn’t recover? And then finally, the question shifts to What resources are the highest priority for protection?

Shortly after Deepwater Horizon — the 2010 disaster that resulted in the release of millions of barrels of crude oil into the Gulf of Mexico — NOAA recognized the need for further study on the topic of oil and its potential impacts on corals.

“Deepwater was a major oil spill that we found affected many kinds of coral at different depths, even very deep corals a mile below the water's surface,” said Greg Baker, an ecologist with the Office of Response and Restoration Assessment and Restoration Division. “We recognized the need to improve upon our existing understanding about how oil and dispersants affect corals, to better protect and restore them.”

After Deepwater Horizon, NOAA’s Office of Response and Restoration (OR&R) reached out to its partner research office within NOAA’s National Ocean Service: the National Centers for Coastal Ocean Science (NCCOS).

NCCOS supports research needs of other offices within the National Ocean Service as part of their mission. Research projects such as the ones described here are relevant to NCCOS’ own coastal work, but they also support OR&R’s mission needs by providing findings relevant to oil spill response and natural resource damage assessment. Within NOAA, OR&R proposed some coral study questions for NCCOS to use to design laboratory experiments.

“Deepwater Horizon was a close call for shallow-water corals,” said Cheryl Woodley, a scientist with the NCCOS Coral Health and Disease Program. “Early in the spill we didn’t know if the oil was going to move over the [Florida] Keys and affect corals in that region. This near miss reinforced the need to determine threshold values for oil toxicity in shallow-water corals.”

To initiate the oil and coral experiments, OR&R provided NCCOS with native Louisiana sweet crude oil from Deepwater Horizon, as well as water concentrations of oil that reflect the 2010 spill and other past events when corals were exposed to oil. To get an accurate result for the impacts, the dosage and environment of exposure (including the lighting) had to be as close to the real event as possible.

“One thing we did during the damage assessment for the Deepwater Horizon oil spill was to design and conduct toxicity studies and health assessments on a wide range of organisms — fish, invertebrates, seagrasses, birds, and marine mammals. In doing so we refined certain methodologies for how best to expose biota to oil in a lab in a way that mimics oil exposures in the field,” Baker said.

To measure the toxicity of the oil on corals, the experiments looked for changes in the health of the coral, such as changes in appearance, photosynthesis activity, tissue integrity, and polyp behavior. The experiments also studied wound healing by cutting pieces of branching coral and looking at the ability to heal or regenerate tissues under varying degrees of oil exposure.

One experiment indicated that a coral’s ability to heal itself by regenerating new tissue was more significantly impaired the longer the coral was exposed to water containing a small amount of oil. NCCOS also tested oil exposure to different types of corals, and found that a mounding species, Orbicella faveolata, proved less sensitive to oil exposure than a branching species, Pocillopora damicornis. 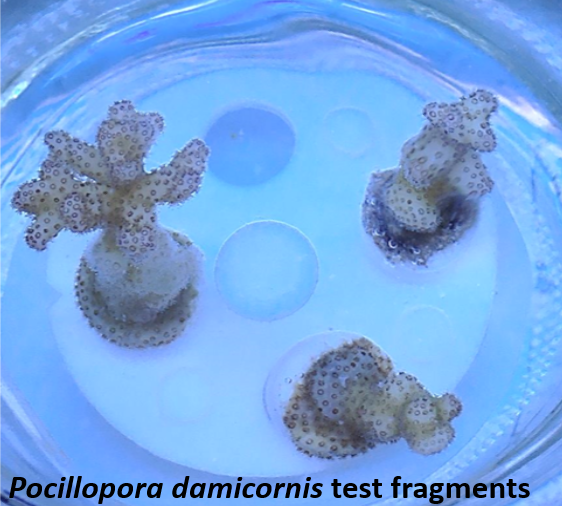 “We look at different possible indications of toxicity throughout the experiments, endpoints that are specific to coral. More commonly we’ve studied toxicity in fish, shellfish, and mammals which may have toxicity endpoints such as mortality, growth, or reproduction. Coral, of course, is somewhat different from these other animals,” Baker said. “For effects of oil on coral, NCCOS’ Cheryl Woodley and Lisa May identified endpoints relevant for studying coral, looking at physiological damage, changes in wound healing, and bleaching.”

Coral bleaching is the loss of the tiny algae that live symbiotically in association with the coral animals. Bleaching may be caused by exposure to contaminants such as oil, and also by other changes such as increases in temperature. The loss of the photosynthesis conducted by the algae harms the coral colony.

The experiment also looked at whether ultraviolet light made a difference in the toxicity. The effect of ultraviolet light on oil creates what is known as photo-enhanced toxicity. To measure the amount of light being used, a chamber was set up where NCCOS could illuminate with wavelengths that mimic natural sunlight. To obtain the appropriate parameters for natural light, the team used light-measuring instruments in the field during active oil spill response so the researchers could duplicate the natural exposure in the lab.

“When we are assessing injuries to biota below the water surface and find that there is a potential for spilled oil to impact coral habitat, one of the things we seek to measure is the transmission of light through the water column. In certain environments water clarity permits greater penetration of sunlight, possibly down to the sea floor where there may be coral colonies. So it’s important to understand how the toxicity of oil to coral may be affected by natural light,” Baker said.

Photo-enhancement of oil toxicity has been documented in a range of marine species, some of which are extremely sensitive, such as young tuna, and it is similarly important to understand how it may adversely affect coral.

The two NOAA offices’ collaborative lab research on oil toxicity to corals is nearing a point where some results are expected to be published soon.

“We’re hoping to provide new information on concentrations of oil that are harmful in different ways and to different species of coral,” Baker said. “We expect there to be useful information that comes out of this research in terms of how best to restore injured coral. From what effects can coral colonies recover on their own? How quickly may it recover? Sometimes when we conduct damage assessments and explore restoration options, the best option is to not intervene and allow the resource to recover on its own just by removing the source of toxicity.”

The cross-office team looks forward to expanding our understanding of the ways oil spills affect coral, what kinds of harm we should focus our damage assessment efforts on, and what response and restoration actions are most protective and beneficial.