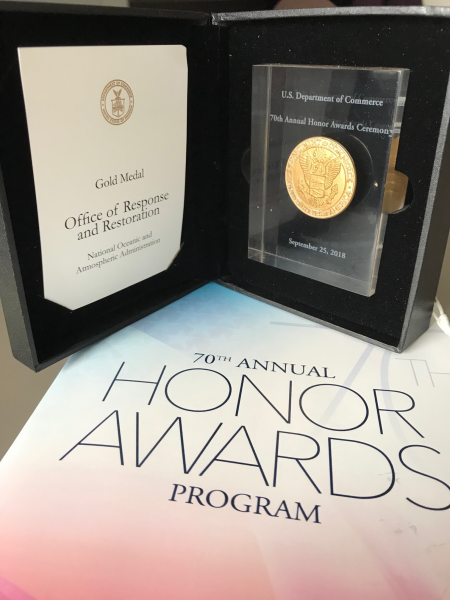 WASHINGTON — On Tuesday, Sept. 25, Secretary of Commerce Wilbur Ross presented NOAA’s Office of Response and Restoration with the Department of Commerce Gold Medal for leadership in the aftermath of the 2017 Atlantic hurricanes during a ceremony in the District of Columbia.

Though the 2017 Atlantic hurricane season had only a fifth the loss of life of past seasons — attributed to improved forecasts and warnings — the physical damage was twice that of previous years. OR&R’s scientific and information management support was integral to the Emergency Support Function #10 (ESF-10) team in protecting wildlife and the environment by identifying, assessing, and mitigating pollution risks, such as vessels, hazardous substances, and other containers displaced by the hurricanes.

The Department of Commerce recognized OR&R for its “innovative leadership in responding to coastal threats resulting from three Category 4 hurricanes in under 27 days during the 2017 hurricane season.”

The 2017 hurricane season was both atypical and prolonged. Response preparations began on Aug. 24, 2017, with vessel removal and pollution mitigation efforts extending for nearly six months after the initial hurricane impacts in both Puerto Rico, the U.S. Virgin Islands, and Florida.

The Gulf of Mexico Disaster Response Center, now part of OR&R’s new Disaster Preparedness Program, served as a staging, repair, and repositioning location. In addition, OR&R participated in unconventional roles including support to the Federal Emergency Management Agency, public information officers and natural resource advisors to support the U.S. Coast Guard. However, the resulting impacts forced a merge of resources and protocols to manage thousands of potentially polluting vessels.

OR&R’s ongoing efforts were in direct support of its mission and NOAA strategic objective to support and bolster community resilience and economic stability in impact areas through the assessment and removal of coastal pollution due to these severe marine debris events.

These storms allowed a unique opportunity for OR&R to coordinate across its oil and chemical, marine debris, and data management teams, allowing for one muscle movement that FEMA and the U.S. Coast Guard relied upon for a seamless approach to assessing coastal threats. The successes and lessons learned from this event will carry forward as we continue to improve our response posture.