Bayley the dolphin surfaces in-line with the camera rig perched on her pool’s edge. Breathing out with a puffing sound, she sends a cloud of mist into the air. Then she immediately breathes in, inhaling air and droplets of mist through her blowhole.

High-tech cameras capture imagery of airborne water droplets created by the dolphin’s breathing, and a caretaker tosses Bayley fish and ice cubes for her cooperation. Next a caretaker sends Bayley off to swim a few laps of the pool, her muscles working harder and demanding more oxygen, before she returns to the camera again. This time she exhales much louder, shooting droplets of water skyward and inhaling deeply. It’s all caught on a high speed camera.

Bayley and the other dolphins at the National Aquarium in Baltimore, Maryland are playing a vital role in oil spill studies. Scientists from the National Oceanic and Atmospheric Administration and Johns Hopkins University engineers are partnering with National Aquarium experts to better understand how marine mammals are exposed to oil during spills.

Dolphin anatomy and behavior put them at high risk of inhaling oil during spills. They breathe at the surface, where oil floats. Unlike humans, who have noses that serve as air filters, dolphins blow holes connect almost directly to their lungs. This creates a more direct pathway for toxic oil to enter their bodies.

However, until the 2010 Deepwater Horizon disaster in the Gulf of Mexico, there wasn’t much research on how marine mammals are exposed to oil during spills. There was even a misunderstanding by some that dolphins would avoid floating oil, an idea proved false by photos and video of dolphins swimming in Deepwater Horizon oil slicks. Eleven years after the spill, some bottlenose dolphins populations in the Gulf of Mexico are still suffering from lung, heart, and reproductive health issues.

“Studying marine mammals during oil spills can be challenging,” said NOAA Office of Response and Restoration senior scientist Lisa DiPinto. “Oil spills occur without warning, often in remote areas, and it’s difficult to locate and study marine mammals during the organized chaos of oil spill response. To get a closer look at how dolphins might be inhaling oil, we needed to develop a novel approach.”

All marine mammals in the U.S. are protected under federal law. This strictly regulates the kinds of research that can be conducted with marine mammals in the ocean and in aquariums. When researching harmful situations like oil spills, NOAA scientists need to find safe and creative ways to study dolphins. That’s where Chesapeake the dolphin and experts at the National Aquarium come in.

By capturing detailed imagery of dolphin inhalation and exhalation in clean water, scientists will better understand exactly how dolphins are exposed to oil and how that may impact the health of marine mammals.

The National Aquarium is home to six Atlantic bottlenose dolphins: females Jade, Spirit, Bayley, and Chesapeake, and males Beau and Foster. They all participated in this study.

Caretakers spent weeks desensitizing the dolphins to the camera rig, incorporating it into training and enrichment sessions, and inching it towards the pool’s edge before putting it in place. Veterinarians inspected the equipment to ensure the lasers, used for 3-D holographic imagery, wouldn't harm the dolphins’ eyes.

National Aquarium caretakers also had to train the dolphins to perform a determined set of breathing behaviors. Dolphins have different distinct breaths, including resting breaths, a “chuff” breath like a sneeze or cough, and deeper breaths when exercising. The dolphins were trained to press their snout to a caretaker’s hand and perform each of these breaths on cue.

During the experiment caretakers instructed the dolphins to swim in line with the camera rig, with sensors suspended on both sides, and breathe. This allowed scientists to capture each exhalation and the following inhalation in incredible detail. To capture the dolphin’s exercise breathing, caretakers asked them to swim quickly, elevating their heart rates and increasing their oxygen demand. They also jumped out of the water, diving and breaching.

Just like humans, dolphins each have their own personalities and interests. Each of the National Aquarium dolphins approached the experiment in their own unique way. Females Chesapeake and Bayley are naturally high-energy animals. They were able to perform multiple exercise behaviors, swimming quickly and propelling themselves out of the water, and swim over to the camera rig without pause.

In contrast, females Jade and Spirit are very curious dolphins—but not as interested in exercise. “They came over to just look at the camera rig and ‘get their turn’ sitting in the structure, even though we weren’t always asking them to breathe when they were there,” National Aquarium marine mammal trainer Kimmy Barron said.

Bonded males Beau and Foster always had access to the camera rig at the same time. Foster turned out to be a very reliable breather, able to offer normal breaths, chuffs, and exercise breaths. Beau, who is a little slower to warm up to new objects around his pool, was happy to watch his buddy Foster do most of the breath work. When Foster did the correct breathing behavior he would usually self-congratulate, making excited vocalizations like squeaks and chirps.

“The dolphins learned quickly that when we sat near the apparatus we would ask them to breathe; some of the dolphins even started offering various breaths and chuffs before we gave them the cue,” Barron said.

As reinforcement for breathing in line with the high-speed cameras, the dolphins were given fish, flavor-free gelatin, toys, rub-downs, and ice cubes. When the team paused to calibrate equipment, caretakers kept the dolphins engaged with a “fish piñata”—a PVC pipe filled with a knotted rope and fish. The dolphins would jump up, pull the rope, and spray fish everywhere.

On the last day of the experiment the dolphins were given extra big buckets of fish and ice, a special reward for the dolphins who made this science possible.

Dolphins have incredibly powerful lungs, exhaling almost 20 times more forcefully than humans. When dolphins exhale they release air which sprays, or aerosolizes, water from their environment into the air. This spray is called “blow.” Then dolphins inhale air, including some of the blow they’ve just created, into their lungs—pumping oxygen into their bloodstream.

However, the mechanics of how dolphins breathe in oily water aren't well understood. Most types of oil are less dense than water, meaning it floats at the surface, and can release volatile organic compounds (VOCs) into the air as vapor. Both the physical droplets of oil and these vapors are known to be toxic to wildlife. It’s understood that marine mammals likely inhale toxic oil vapors during spills, so this study focuses on the role of oil droplets.

NOAA scientists hypothesize that dolphin exhalation might cause the production of large droplets of oil and sprays of smaller aerosolized oil particles. So in addition to breathing in toxic vapors, some of these large and smaller oil droplets might also be inhaled by dolphins. The size of the droplets matters because it influences how much oil dolphins are exposed to and how deep into the lung the oil reaches.

To test this hypothesis, Joe Katz and his team of Johns Hopkins University engineers designed a high-speed holographic camera. “The tools aren’t new, we’ve used them before to study particles, plankton, and bubbles in floods, but using them to study dolphins is new. We took tools from the laboratory and brought them to the aquarium,” Katz said.

The rig uses a laser, mirrors, lenses, and a high-speed digital camera to track water droplets. When dolphins exhale in the clean water of their pool, water droplets disrupt the path of the laser, creating 3-D holographic images of airborne water droplets and the blow’s plume as the dolphin exhales and immediately inhales.

This allows scientists to capture the size and speed of droplets in space and time during a breathing event. Another high-resolution camera zooms in to understand the droplet concentration near the dolphin’s blowhole, while a third camera captures a zoomed-out view of the plume. Scientists captured over 90 dolphin breathing events during the study.

Next steps will take place in Katz’s laboratory where his team will use these data to create a mechanism that mimics dolphin breathing, creating a similar droplet plume in a tank. That mechanism will then be tested with different types of oil and with oil mixed with dispersants—chemicals sometimes used during oil spill response and cleanup.

This will help scientists understand what kinds of oil droplets marine mammals may be inhaling during oil spills, without ever putting dolphins in harm’s way. 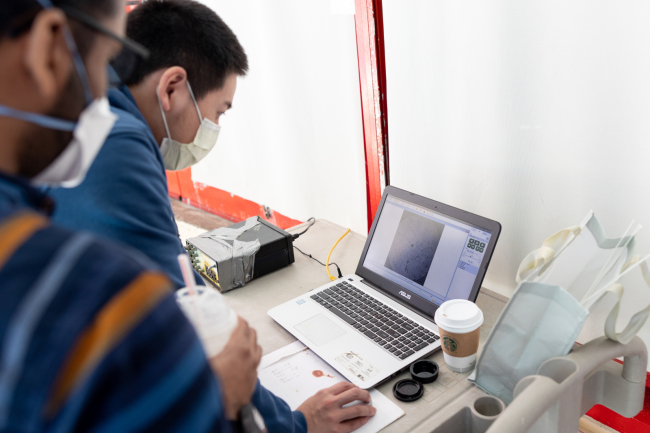 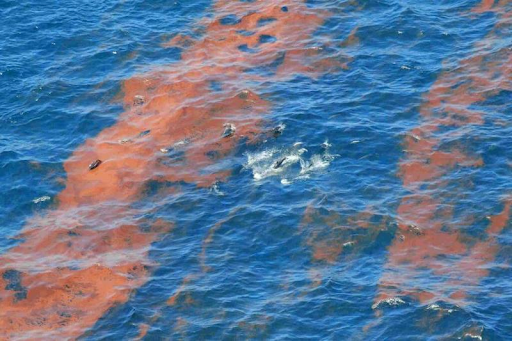 One reason it’s important to understand the impacts of oil spills is to hold polluters accountable. The Oil Pollution Act mandates that those responsible for spills must pay to restore the environment. Funding for this study was provided through a Deepwater Horizon oil spill restoration plan and is aimed at promoting science that helps marine mammals. A more thorough understanding of how marine mammals are impacted by pollution will help NOAA design restoration plans that help populations recover and guide future disaster response.

Currently scientists understand relatively little about the air just above the surface of an oil slick, the space where dolphins, other marine mammals, sea birds, and sea turtles surface and breathe. Findings from this study may influence how scientists collect samples during oil spills, prepare for disaster response, predict the health impacts of oil on wildlife, and hold polluters accountable for restoration.

By looking closely at how dolphins breathe scientists will be able to better understand the big-picture impacts of oil spills. This unique study was made possible by interdisciplinary partnerships between National Aquarium caretakers, NOAA oil spill scientists, Johns Hopkins engineers, and the Coastal Response Research Center for Spills and Environmental Hazards at the University of New Hampshire.

It will provide unprecedented insight into what exactly happens when dolphins surface in oil spills—using technology and National Aquarium dolphins to help keep wild populations safe.

This project enhances whale and dolphin response and restoration activities in the Gulf of Mexico to address a variety of potential disasters. It was selected as a restoration project by the Deepwater Horizon Open Ocean Trustee Implementation Group as part of a 2019 Open Ocean Restoration Plan.